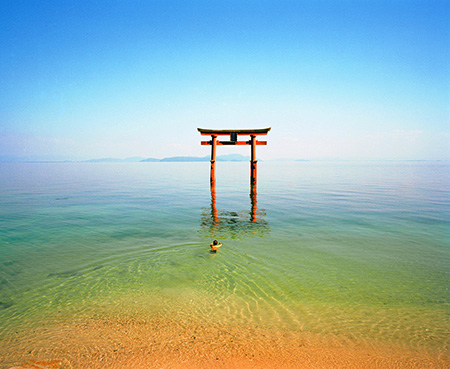 At age 87, photographer John Upton is finally having his first solo exhibition, “Right Place, Right Time,” lauding his six-decade career. Comprised of 29 images, this condensed retrospective includes four series. Each successive one demonstrates his evolving styles. “Early Work” from the 1950s presents images created long before the advent of digital photography. These five images are imbued with modernist ideals of form and tone, along with contrast of light with dark. They include two close-ups of rocks and tree roots, each titled “Point Lobos Near Carmel, CA.” Both images express the importance of blending composition and content. His “Portrait of Robert Macaron” harkens back to his mentors’ influence, including that of Dorothea Lange. Macaron, wearing blue-collar clothing and a serious expression, personifies the hard-working laborer of the mid-20th century.

The eight “Japanalia” color images, dating from 2000 to 2004, demonstrate his seamless evolution to color photography. Together they document Japan’s populace undergoing social change. “Tokyo Teens” mimic their western counterparts in terms of hair styles, dress and facial and bodily expressions. “Swimming Shaman in Lake Biwa” is a painterly style photo of a swimmer in a large pastel lake, a composition that functions as the symbolic pursuit of leisure activities. The “Jungle Road” series, comprised of Hawaiian landscapes, takes as its subject several dense, luxuriantly colored jungles, as well as contrastingly spare black and white lava flows. The final series is “Petaluma,” shot in the last few years near his northern California home. Including pictures of murals, signs and landscapes, these convey Upton’s practiced eye for composition, along with his never-ending desire to explore the world around him.