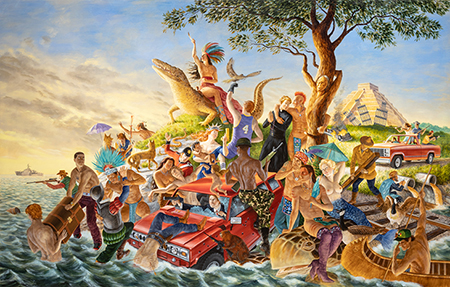 Political pundits have spent years exploring the rise of Trumpism, postulating explanations for the populist movement steeped in racism, sexism and xenophobia. They’ve dissected American history and contemporary life, seeking to understand how our democracy could have elevated Donald Trump to power, as if his election was an aberration of American culture rather than an embodiment off it. Meanwhile, indigenous artists working in North America during the last two decades have been visualizing the factors that helped to make the last four years possible. More than 20 of their works are featured in “Larger Than Memory: Contemporary Art From Indigenous North America,” an exhibition that elucidates historical and contemporary manifestations of colonizing culture even as it prompts consideration of ways it’s been amplified during the age of Trump. Curated by Diana Pardue and Erin Joyce, the exhibit at Phoenix’ Heard Museum continues through January 3, 2021.

Several of these artists consider the ways indigenous people have been misrepresented and marginalized. Lewis deSoto’s “Suburban Skookum (Self-Portrait)” (2018), a towering sculpture of the artist holding an asthma inhaler in one hand and a microphone in the other, subverts dolls originally designed by a white woman that heightened negative stereotypes of American Indians. With “Miss America” (2012), Ken Monkman shifts the colonizer gaze to an indigenous lens by appropriating and recontextualizing art historical motifs, flooding landscapes with indigenous bodies, and adding iconic imagery such as a temple ruin and remains of the Twin Towers after 9/11.

The exhibition also considers exploitation of natural resources, climate change, and habitat destruction — all hallmarks of Trump policies that prioritize profits. During his time in office, Trump’s administration permitted expanded oil drilling and increased work on the wall along the southern border of the U.S., displacing both indigenous people and animals that live on the affected land. Cara Romero’s “No Wall” (2018) pictures four indigenous children wearing aviator sunglasses with dark lenses, standing in front of a brick wall, painted white, that bears black text reading “No Wall.” For “This is Not a Snake” (2017-2018), Cannupa Hanska Luger created a winding serpent using refuse from exploitive extraction and trade practices.

Defining moments in Trump’s presidency include his assertion that there were “good people on both sides” after confrontations between white supremacists, who gathered in Charlottesville, Virginia in 2017 to protect a statue of Confederate general Robert E. Lee, and those who counter-protested against them. It’s a flashpoint that reverberates through two works by Ian Kuali’I, including “Monument/Pillar” (2020). The piece comprises a portrait of King Kamehameha III alongside a portrait of Captain James Cook. The Hawaiian ruler faces upright, but the British explorer is shown upside down, forcing the viewer to adopt a different perspective.

A number of works are layered with meaning, due in part to the ways they channel particular challenges of the Trump years, including the pandemic that continues to rage on his watch, taking its greatest toll on indigenous communities and people of color. The round red price tags that slowly cover a man’s face in Mike Patten’s “Little Red Dots” (2017) allude to not only smallpox, but the COVID-19 virus, and the role commerce played in spreading each disease. Patten’s “Native Beating #1” looks like a white baseball bat partially covered in bright red blood. The red beads form a map of Canada when they’re laid flat. Amid COVID-19, the piece also serves to remind us of the ways sports have been prioritized over other aspects of community life, and the ways that leisure activities for the privileged are valued above necessities like food and shelter for the impoverished. “Larger Than Memory” also includes works that reference the impacts of trade and Western diets on indigenous health, such as a canoe layered with fry bread in Jaune Quick-to-See Smith and Neal Inuksois Ambrose-Smith’s “Trade Canoe: Fry Bread” (2018).

Colonizer mindsets and practices existed long before Trump was elected in 2016, of course. But this exhibit demonstrates that thoughtful consideration of contemporary works by indigenous artists can lead to a greater understanding of this particular moment in American life, including the Trump phenomenon.