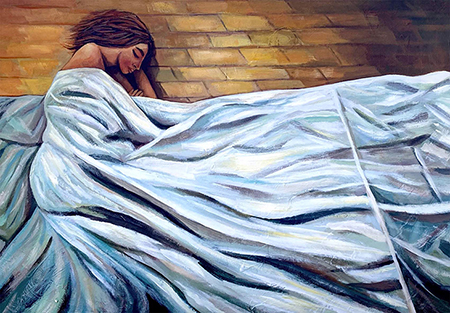 William Hernandez, “Late at Night I See the Promise of Tomorrow, and the Happiness it Holds,” 2020, acrylic on canvas, 24 x 42”

Trained at Peru’s National Academy of Fine Arts in Lima, William Hernandez spent his junior year in Chile on a scholarship at a Department of Culture workshop. As a result, given his history of gallery exhibitions and public mural projects, Hernandez’s style has evolved into a brand of direct, simple figuration that he executes with a strictly limited palette and stark distinction between residential and outdoor size and scale. The stresses and strains of this double aesthetic identity and divided loyalties are a central theme of “I Wish I Could.”

That title implies something that remains unfinished, and individual works indeed address varied aspirations. Since the figures all seem to be looking away from one another, “I wish I could communicate with people better” is one possibility. “I wish I could break through to deeper personal meaning other than family and friends” is another. Hernandez’s people take on cartoon or comic-strip dimensions, at best lifting loneliness and isolation onto a humorous, touching plane. At their worst, however, they recall Walter Keane, the controversial 60s-era San Francisco Bay Area con artist, subject of the 2014 film, “Big Eyes,” whose paintings turned out to have been made by his recently deceased wife, Margaret, and signed by him.

Hernandez’s own career is divided between North American career strategies pursued since he moved to Portland at age 32, and his earlier, more openly populist career in South America. Those youthful works were more clearly indebted to Surrealism, the only modern-art movement allowed entry into Hernandez’s hushed and happy inner world.

That history leaves us with Hernandez’s “This is How I Feel” (2002), a multi-faced, male-and-female portrait head of someone wearing a black-and-white shirt. Cosseted by a purple-drenched background, the figure is iconic and illustrative, expressing “this is how I feel,” without a drop of expressionism or angst. Similarly, “Individually, We Are One Drop/Together, We are an Ocean” (2021) lifts directly from Dali’s film, “Un Chien Andalou” (1929), by putting eyes on hands that are shielding a cowering face. The title sounds like the familiar Chilean resistance chant, “The People United Will Never Be Defeated.” It’s hard to reconcile the activist tone with the recessive, timid gesture. “The Daydreamer” (n.d.) works better as a Surrealist trope, with its figure in a dress hoisted upon a wire high above a miniaturized Space Needle. Orange sky ablaze, Seattle hasn’t looked this threatening since Alan Rudolph’s film ”Trouble in Mind” (1985), wherein Divine crashes a sculpture by Dale Chihuly and it rains all the time.

To be fair, Hernandez’s brand of Surrealism has a “Twilight Zone” sensibility of disturbing normality. Examples include the eerie twin boys involved in “The Argument” (2020), and “Zoom Time,” (2020), which focuses our attention on a seated child surrounded by broken toys. Also in this vein, “Teach Me to Believe” depicts a seated girl flutist surrounded by creepy descending acrobats. It feels as if she has summoned them with her music.

More akin to the murals the artist has collaborated on in Oregon, several small, rectangular paintings crowd groups of figures into environments of safety, as in “A New Dawn is Beginning,” “How Beautiful is My City,” “The Joy Collection,” and “My New Friends” (all 2022). With Mount Hood resplendent in the distance, and friendly donkey-pets closer up, these works are rather saccharine. One pines for anything that alludes to Peru’s gruesome political history, seized by dictator Alberto Fujimori and torn apart by the Maoist guerrillas, Shining Path.

Hernandez’s only open allusion to his native country appears in “Let’s Go Outside for a Life Lesson” (2022), with a friendly llama guarding a mother and son. The “lesson,” one assumes, is the violence left behind. If so, “Some People Walk in the Rain, Others Just Get Wet” (2022) must be another mother and child fleeing criminal or political violence. The beautiful female nude wrapped in a sheet in “Late at Night I See the Promise of Tomorrow and the Happiness it Holds” (2020) is a bitterly ironic comment on the terrorist raids in Lima. For the most part, the carnage and urgent social problems that have plagued Peru and its neighbors are otherwise completely absent or perhaps repressed.

Most successful and perplexing of all, “Based on a True History” (2022) depicts the artist painting spots on a Holstein steer. Rebuilding nature from the ground up, Hernandez re-takes control in order to confront potential power and domesticated danger. As seen here, Hernandez confronts his demons rather than hiding them in happy-face vignettes.