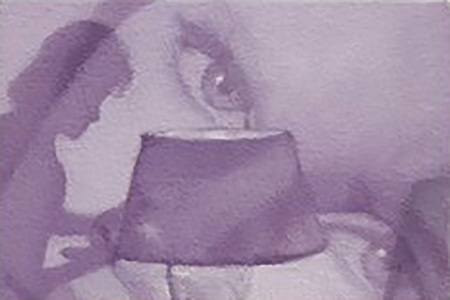 Minnesota-based painter Julia Maiuri’s “Mindscreen,” a term referencing a narrative and psychological film technique, features some twenty paintings as well as gouaches on paper. She intentionally works on a small scale, mostly 8 by 10 (or 10 by 8) inches, intended to pull us as close as possible to her multilayered, dream driven psychodramas.

For source material she mines film stills and sequences from horror movies and auteur cinema. A good example is the work of David Lynch, whose convoluted dream-inspired images of alternate realities are riddled with ambivalence toward a static notion of identity. His films are one among the numerous suitable sources for Maiuri’s project. As filmmakers activate the multiple fades, dissolves, color desaturation, and other editing techniques in order to render aesthetically sensible the inner thoughts, dreams, and visions of their dramatis personae, her characters and settings are familiar as film archetypes but do not merely replay them in terms of oil paint.

It is hardly new that cinema informs painting. About a century ago, in a turn against painting, Walter Benjamin theorized about the medium’s obsolescence, citing its “cult” value, in favor of cinema as a revolutionary medium that increased critical awareness. Painting, however, never went away.

Through the influence of modernism, the notion of self-consciousness (or a first person point of view) came to occupy a relevant presence in fine art. This in turn influenced early cinema, which was initially associated with third-person narration, to also exhibit sequences and images rooted in the first-person. This phenomenon was identified and fleshed out in 1978 by Bruce Kawin, who coined the term “mindscreen” in his book “Mindscreen — Bergman, Godard, and First-Person-Film.” For Maiuri the theoretical framework set forth in the book is a powerfully motivating guide, but it is not programmatic. What is relevant is Kawin’s direct formulation of his theory, that “A mindscreen is a visual (and at times aural) field that presents itself as the product of a mind, and that is often associated with systemic reflexivity, or self-consciousness.”

Kawin’s point is that such images are metaphors of our reflective capacity, but reaches beyond rational deliberation and into dreams and the unconscious, which is the central concern of these paintings. Maiuri keeps her color palette within a narrow range, each piece executed with an overriding hue, sometimes monochromatic, or paired with one additional color. In “Night Routine” a face overlays the entire surface of a bedroom scene. She imagines, or remembers, the shadow of a woman whose shadow melds into the frame as she moves toward a lamp in the center of the composition. In this otherwise monochromatic scheme, the lampshade bursts out with a strong purple that anchors the image. The narrative of “Night Routine” is implicitly far more than the moment of turning a light on or off. It is the connection of that moment to the omnipresent face that matters, not the larger narrative. In “Red Room” a monochrome magenta wash supplies the color in a smaller composition of 4 by 6 inches that borrows the central detail of “Night Routine,” but tilts the face into a reclining position, the eyes still open and awake.

These paintings go easy on the pigment, both for its low contrast and thin surface. The effect is to emphasize the ethereality of twilight dream states. The “Watcher” evokes this state very effectively. A face cropped by a circle sits in the center of the image. The subject’s eyes, nose, forehead, and cheeks are circumscribed as if reflected in a mirror. Shadows run across the face, cast by what appear to be window blinds. This extreme close-up thus peers out at us through a window that we don’t directly see. Completing the image, a mysterious house completes the entire background. The “Watcher” may be looking at the house in real time, dreaming about an imaginary structure, or recalling it in memory. Maybe she’s physically inside the house. We will never know, nor are we meant to.

The attendant cinematic irrationality, closely related to a dream state, is fully, intentionally, at play in this and other paintings, each one depicting a world of its own that begs to be unraveled.

What Maiuri has done with this series of little paintings, given her interest in the mindscreen trope, is to invert the mechanics of how the film medium functions, how it’s experienced. Projected film images are meant to overwhelm our field of vision by virtue of their scale, seducing us with an immersive sensory assault that we are unable to pull away from. For Benjamin, the medium’s shocks and cuts prevent the viewer from the total absorption that painting demands, along with its “cultic” or “religious” value, which in turn opens up the assumption of a critical attitude.

Maiuri has taken the film image and miniaturized it in the hopes that we will advance toward an unthreatening, non-immersive object about the size of an iPad — just as tablets and phones now do with the movies that were originally made for the silver screen alone. Could this be a reflection of how cinema has been taken out of context by a streaming, device-oriented system that encourages the consumption of TV and movies on a comparable scale — defanging it if you will? Perhaps, but then, when we approach more closely, we will find out that now, as with phone screens and social media, we can’t easily get away. Maiuri is attempting to restore painting’s absorptive aspect, a reflection of altogether new addictions wrapped up within the seductive euphoria of dreams.