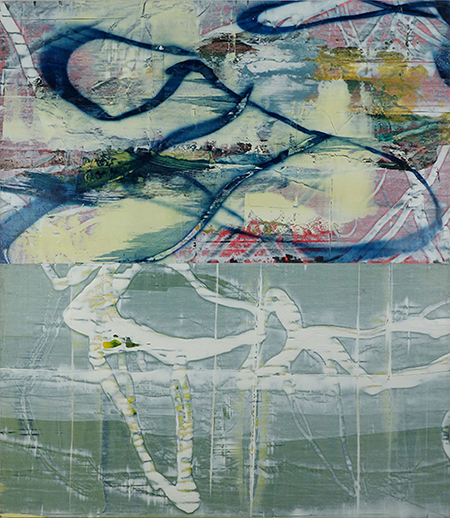 The end of art has been declared but not, perhaps, the demise of painting. Although painting’s extinction has been celebrated many times (in traditional avant-garde practice), it seems that reports of its demise were exaggerated by eager heirs. Two abstract artists, one from New York, Karl Klingbiel, and one from California, Marti Somers, demonstrate to today’s digital utopians that there’s plenty of life yet left in paint; and their works makes a strong case for the Bauhaus’ and Clement Greenberg’s modernist concept of medium-specificity, i.e., that art should reflect and even focus on the inherent properties of a medium.

Klingbiel’s explosive gestural abstractions in oil, with their seemingly windblown, fluttering ribbons of color, and Somers’ encaustic collages, immersing snippets of imagery within masterfully orchestrated colors and textures, could only have been created in glorious paint pushed to its limits by experienced practitioners who clearly know their roots: Diebenkorn and deKooning in Klingbiel’s case; Rauschenberg, Redon and to a lesser degree Vuillard in Somers’. If these links to the tradition of modern painting are clear, it would be a mistake to miss the energy and life infused each artist infuses in them; they’re alive in the observer’s gaze, as all good art is, no matter how old or new.

Klingbiel has written, “I don’t want to give you a thing but rather everything.” That generous outlook produces compendious paintings that balance loose, flowing gestures with rich textures; he’s a maximalist who jam-packs his canvases with painterly experiments and accidents, and knows how to make them cohere into a larger vision. His calligraphic lines, so fluid as to seem poured, zoom around like errant missiles above and in front of horizon lines or grids of scraped paint. Viscerally affecting works like "Neptune Adventure,” "The Map and the Territory,” "Marine Park" and “Tabatra" are compelling syntheses of the two rival tendencies, or warring camps, of Abstract Expressionism, the gesturalists and the field painters.

Somers’ sensibility is more poetic and suggestive. “I hope to bring you into my world of storytelling. The search for peace and beauty, the fragility of nature against modern life, the human form in balance with others, and, in the face of an often foreboding sky, abundant hope,” she writes. Her scrapbook-like merger of natural images (both painted and collaged) and writing, rendered in tactile, fragrant wax-based encaustic paint, is seductive and convincing, a sorely needed respite from rather bleak reality that M. Matisse’s proverbial tired businessman might gaze upon, sighing. Stylized flowers, Buddhas, butterflies and birds appear prominently within Somers’ heavily textured, ‘antiqued’ bands of color and pattern. Her poems and admonitions or mantras (CURIOUS, BELIEVE, TRUE TRUE) lend a verbal element to the visual feast of "The Buddha Ball,” "String of Pearls,” “Exquisite" and "Pearl Blossom." Rauschenberg meets Redon: such surprising yet right combinations appear only in the worldwide web of painting.