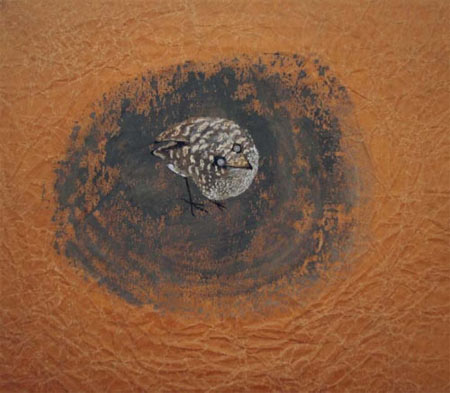 The fragility of the human experiment is becoming increasingly evident every day. While scientific rationalism and capitalism have had inestimable benefits for mankind, they have also exacted a price both on the global environment, wracked by consumption-fueled pollution, and on our ever-more robotic souls. Alas, all this as we struggle to learn the latest machine language to gain commercial advantage over our avid fellow resource-seekers.

The mysterious, silent paintings of Morris Graves are the antidote to such overheard chatter, even the satirical, but visually jazzy “Roadside Plants with Machine Age Noise” (1957). This mystic of the Pacific Northwest, a student and friend of Mark Tobey, makes for a noble alternative to mass culture’s increasingly invasive and acquisitive razzle-dazzle, as this retrospective of his work, curated by the art historian Peter Selz, a Graves admirer since 1941, proves. It’s a fitting hundredth-birthday tribute, comprised of almost fifty pieces borrowed from the Morris Graves Foundation, the Jordan Schnitzler Museum of Art (Eugene), the University of Oregon (Eugene), the Fine Arts Museums of San Francisco, St. Mary’s College (Moraga), Greg Kucera Gallery (Seattle), and various private collections.

All phases of Graves’ lengthy career are represented, from an atypically religious resurrection image, “If Eye Be Lifted Up,” an early watercolor reminiscent of Egon Schiele, Gustave Klimt and even Diego Rivera in terms of its expressionism, to the trademark temperas/gouaches on Oriental rice paper of the middle period with their spiritualized animals, plants, vases, urns and chalices. Fine examples include “Bird (1933), “Bird of the Inner Eye” (1933), “Serpent and Moon” (1938), “Bird, Surf and Moon” (1941), “Effort to Bloom” (1943), “Gargoyles” (1948), “White Flower in Vase” (late 1940s or 1950), “Footed Vase with White Flower” (ca. 1950), “Night Bird” (1950), “Hibernation” (ca. 1954), and “Irish Animal” (1955). The late tabletop landscapes such as “Quiet Still Life” (1991) present lineups of vessels that are more than vessels. Less familiar is a sculpture from Graves’ “Instruments for a New Navigation” series, inspired by the U.S. space program, invoking human-scaled totemic columns, pillars (or devices) synthesizing and harmonizing the scientific/intellectual and natural/intuitive realms.

But wait, that’s not all. Also included are portrait photos of the elusive Morris by Imogen Cunningham and Brassai. The former depicts a mystical, saintly man of nature, withdrawn amid rocks and shadows. The latter is more straightforward, with Graves posing for the camera at Chartres Cathedral, where he spent six frigid months in 1948 drawing and painting — before destroying the works on returning to his beloved Puget Sound hermitage.

The nicely illustrated catalogue features a brilliant 1955 essay by poet Kenneth Rexroth that places Graves in the visionary tradition as characterized by Samuel Palmer, Odilon Redon, and Albert Pinkham Ryder, as well as within the Oriental sumi tradition with Sesshu and Ashikaga. Graves’ friend, the composer John Cage said Graves’ work embodied “the coexistence of the spiritual world and the world of the senses.” In that ecumenical, pantheist, and multidisciplinary spirit, the gallery has scheduled music and dance performances in honor of, in Rexroth’s words,  “the transcendental Aesop.” Another friend of the artist, the Surrealist Gordon Onslow Ford, in his book “Creation” (1978), wrote about “Bird of the Spirit” (1943), “the little bird evokes gentleness and awakens an attitude of respect towards nature that is now, more than ever, essential.” This sentiment applies to the artist as well.