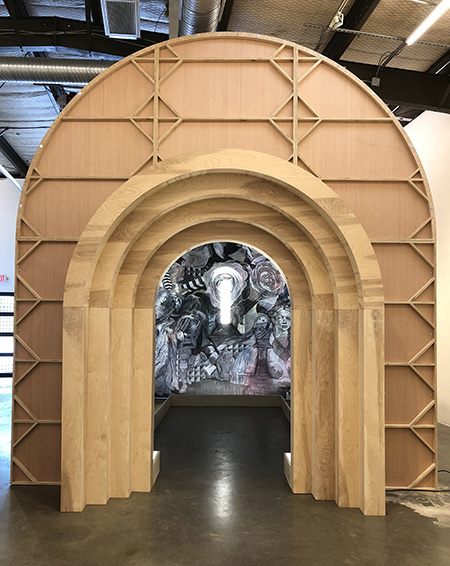 The fact that artists have painted murals on the walls of temples, churches and civic buildings is something about as old as art itself. It’s a history that inspired Francisco Moreno to spend two years on a single project titled “The Chapel,” a structure can be read as both a sculpture and as painting; and it’s the centerpiece of Moreno’s current exhibition. The project was made possible through partial funding by a micro-grant awarded to the artist in 2016 by the Nasher Sculpture Center. Moreno became fascinated by an installation at the Prado Museum, a recreation of the interior of the 12th century Hermitage of the Vera Cruz de Maderuelo. Architecturally classified as Romanesque, in it were installed the original murals that had been transferred onto canvas in 1947. This surprising find, combined with Moreno’s interest in the dynamics, illusion and intense light sources found in Baroque art, plus his interest in the tradition of Muralismo from the movement in his native Mexico, were the seeds that grew into this ambitious project.

“The Chapel” is a completely fabricated structure that we approach from the backside, illuminated by an artificial light source. Constructed by hand, it looks like a wooden rectangular box with a barrel vault, and includes the trappings of a 12th century church, such as sections in front that resemble doorjambs, with a tympanum above the entrance. The fact that it looks like a simple unadorned structure on the outside sets up the dialectical contrast that hits us full force upon entry. Once inside, we experience a completely seamless visual immersion in a series of murals that cover every inch of the interior. They channel a Baroque illusionism that disguises the built aspects with image saturation woven together within a geometric patterning that Moreno borrowed from artisanal wood carvings found in Mexico. The unifying theme lies in the way the disparate images interweave his interests in art history from Old Master paintings to twentieth century modernism, along with fantastical creatures, spaceships, engine blocks, turbines and mechanical objects in general. The overall color tone in grey-blue was executed with pencil, vine charcoal and acrylic. Color highlights further enliven certain sections with orange, green, yellow, blue, purple and violet.

It’s impossible to see the entirety of the piece from a single vantage point, requiring that we cast our gaze 360 degrees. The surfaces are interconnected and layered like collage. This confers an added element of depth to the surface that demands careful, sustained and active viewing because there is always something new to find. Unlike in the past, where fresco and mural projects followed a preconceived plan approved by patrons, Moreno improvised his choice of imagery in a type of stream of consciousness method drawn from his memory bank of a never-ending set of drawings he’s worked on over the years. In his mind, coming up with a plan and then merely executing it again on a larger scale seemed boring. His excitement remains within the space of the unknown, channeling surrealist games like automatic drawing where elements of chance and surprise drive the visual narrative, dispensing with models and plans mired in linear narrative.

The interior of this chapel therefore operates aesthetically unlike the historical examples built all over the world that were conceived of for their religious value. It is also unlike the secular murals painted through both the WPA in the U.S. and during the time of the Mexican muralist movement, which were bound up in political and genre narratives. The point of a chapel, where no one worships or dabbles in ideology, rests in a metaphor of art for arts sake, itself a form of aesthetic theology, where the thing venerated is the power of human imagination.