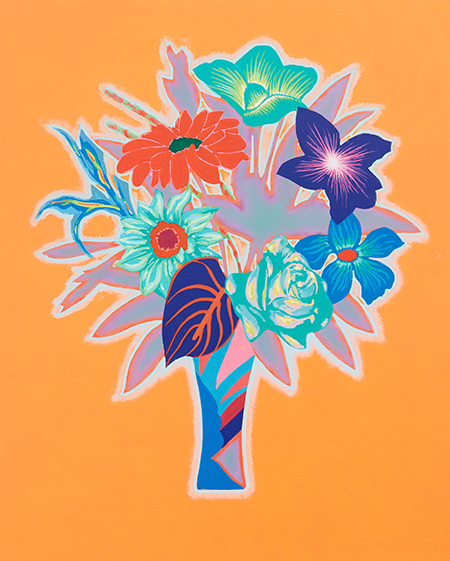 In two concurrent exhibitions, veteran Roland Reiss exhibits selections from two of his best known bodies of work: staged sculptural tableaux housed in Plexiglas boxes, known as “Miniatures” (1977-91), and paintings of flowers that he titles “Florals” (2008-15). The more recent “Florals” reveal that the artist, who turned 89 in May, hasn’t lost any steam. Not only has he taken the “Florals” in an inspired new direction, but he has also returned to making “Miniatures,” having completed six new tableaux that for years sat in his studio as works-in-progress; these are now included in the Rosenstein exhibition.

Reiss’ approach to artmaking has always been philosophical. He was interested in the ways human consciousness can be expressed through visual experience and in how that experience can affect our perceptions and emotions. In this Reiss remains an artist who gives consideration to the needs of the viewer. In the “Adult Fairy Tales,” which initially were influenced by movies and television, Reiss builds tiny staged scenarios from multitudes of small, hand-cast figurines and objects arranged in dioramas that invite puzzlement and questioning. We are encouraged to bring our own experiences to the table and construct meanings or stories in response to what is being seen. Keep in mind that he was doing this over 40 years ago.

One of the most effective examples is “Adult Fairy Tales I: Language and Myth “(1983). It presents a frozen moment at a corporate office where stiffly posed figures engage in a mysterious drama. Specifically, a male executive in a business suit stands with arms folded while listening to a bespectacled female coworker whose arms are outstretched as if she is making a point. Another female, perhaps a secretary because she holds a notebook, observes them from a corner of the room. To add to the intrigue inherent in this type of open-ended narrative, an axe is propped against the office desk. In addition to suggesting a storyline, the tableau articulates ideas about art itself, reflecting Reiss’ view of the assemblages as “three-dimensional paintings.” Aside from the axe, all of the inanimate objects are painted a uniform shade of gray, which alludes to the minimalist practice of monochromatic painting, while also distinguishing the architecture and furnishings from things that are animate (people and plants) and the most significant props, which are rendered in color.

In the new “Miniatures” Reiss expands on the earlier series. In the newly completed installment, Reiss opts for the maximal, overloading each marbleized miniature living room, which he constructed in 1980, with an over-the-top plethora of objects emblematic of American obsessions with food, money, books, and astronomy. To lend his signature to the project, he printed his name on the base of each structure and adorned a wall in each living room with a miniature version of one of his new “Florals.”

As in the sculptural tableaux, Reiss provides many avenues for constructing meaning in the “Florals” seen at Claremont. In early examples, independent flowers are arranged in constellation-like clusters within which are embedded pictorial references to various other subjects. Reiss also toys with spatial perception by combining flat and illusory perspectives within a single painting. This is especially evident in “Pacific Dance” (2014), where the “dance” refers to the animated interaction between lily pads, which appear as flat blue-green ovoids, and four white lilies, which are rendered more realistically to suggest volume.

The “Florals” at Rosenstein include selections from “American Still Life” (2014), a series of predominantly monochromatic white paintings, and “Unrepentant Flowers,” a new iteration of floral paintings that exhibit joyful, psychedelic color. In the latter, Reiss again shifts attention to distinctions between figure and ground, contrasting a background of thick, broad brush gestures with more thinly painted white vases holding mostly barren branches that have lost some of their leaves, but are sprouting new ones. Metaphorically, these images reflect Reiss’ self-avowed optimism regarding the nature of growth and the process of aging.

“In living color” would be an understatement in describing Reiss’ newest “Unrepentant Flowers,” which traverse a wide spectrum of unbridled colors. In each painting, a polychromatic bouquet of flowers blooming in a matching multicolored vase is centrally positioned, isolated against a vibrant monochromatic field of a deep or brightly contrasting color, which is identified in the works’ subtitles. Shifting attention from medium to imagery, Reiss has eliminated the thick brushwork of the previous series, with everything now painted smoothly and evenly. Additionally, what makes the new floral bouquets so splendid is that light emanates radiantly from within each flower, reinforcing the artist’s belief that “the whole universe is constituted by light,” while also facilitating his personal goal of wanting to leave us with “a sense of well being.”