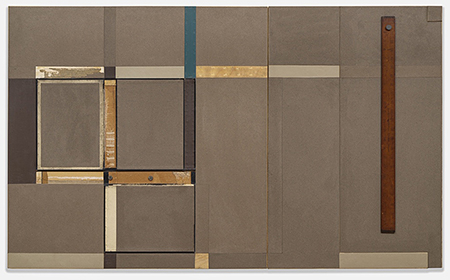 John Fraser works with mixed media and found objects to create abstract constructions, twenty-seven of which comprise this new exhibition.  The pieces date as far back as 2002, but most range from between 2008 and 2018.  Fraser lives and works not far from Chicago, Illinois, and received his BA from Roosevelt University in 1975, followed by an MFA in 1989 from Northern Illinois University.  He has mounted countless solo exhibitions all over the country and abroad since the mid 80’s.

In his working style, the artist shy’s away from bold tints, preferring to keep color schemes muted,  along the lines of wooden hues and old paper from natural, organic objects.  Repeating motifs include various measuring devices like rulers, as well as paintbrushes, staples, graphite lines and pieces of thread imbedded into his surfaces.

Many of the pieces like Bildtafeln, 2011, start with some hand-tooled wood base that supports collaged objects, such as discarded covers from antique hardbound books. He slowly adds layers and objects, giving what remains of the books a second life as art; these become meditative surfaces bringing to mind all the people who may have read these volumes, while invoking in viewers new associations as we contemplate their transformation. It is through his assembly method that a complicated abstraction emerges, tying into his hope that the viewer will take the time to unravel each visual mystery.

Works that use recognizable and objective elements recall  assemblage art of the 20th century. These dispense with the traditional square or rectangular plane borrowed from painting and venture toward asymmetry and semiotic references. In one of the best pieces titled Measured Appearance of 2016, Fraser references personal biography and memory.  Pasted on the front of a small wooden plinth attached to the wall is a vintage men’s white shirt collar, the removable kind, set upside-down.  On top of the shelf-like plinth sits a wooden 90-degree ruler that creates interesting formal shapes against the angled geometry of the collar.  Fraser’s father manufactured shirts in a factory where the craft, tools, and the final product became a source of fascination to the artist; here he invokes remembrance and the loss of a simpler time.  Unlike the deconstructed books that are all but recognizable and transformed into abstractions, this assemblage privileges realism that acts on the viewer’s emotional experience in a totally different way, activating nostalgia directly.

In other pieces like (Measured) 4-Part Horizon, 2016, or The Confines of Consistency, 2013, Fraser takes the antique books in yet another direction.  In these two pieces, rather than using wall mounts, the artist leans books as if displayed on a shelf, simply leaning against the wall like merchandise in a store; the arrangements also call to mind the way people arrange framed pictures on a table. In these and in all works, Fraser invites the viewer to consider depth through a type of layering that is both physical and emotional. There is a kind of nostalgia in this work for the hand-crafted and its place within the ambitious art of our digital age; his attention to touch is something that Fraser would argue never really went away.