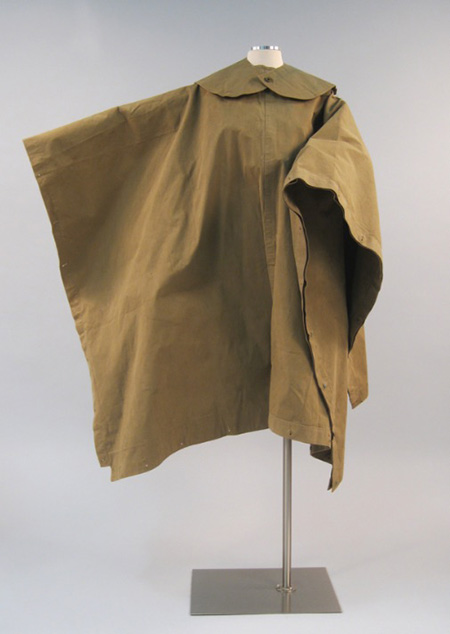 While Los Angeles has its heritage of film glamour when it comes to clothing and fashion, and San Francisco exudes a patrician high style for both men and women’s attire, Seattle has its own legacy of sportswear like stretch fabrics for skiing. This, in turn, led to mountain-climbing necessities like Gore-Tex fabric and hiking boots and eventually Grunge, the most influential innovation of all. “Seattle Style: Fashion/Function” fuses all the strains together — and throws in haute couture for good measure. The results are a delightful mix of high and low, fashion and art, pop clothing and pop music, not to mention oddball developments like see-through plastic raincoats, men’s kilts and African-inspired clerical garb.

Divided into four areas set on well-lit platforms are mannequins dressed in models from the Museum’s collection. The exhibition provides a walk-through answer to the question of how a geographically remote city came of age from the late 19th century, through the boisterous 20th, and into the current moment. Cookbook author and art collector Alice B. Toklas’s family opened Toklas & Singerman in 1875, Seattle’s first department store, before they sold it and moved to the Bay Area. This became MacDougall & Southwick, soon to be joined by Rhodes, the Bon Marché, Frederick & Nelson and, finally, Wahlin and Nordstrom. By 1907, each sent buyers to New York and Paris to bring back clothes for the trophy wives of wealthy timber barons, attorneys and property developers. From New York came the Schulman brothers’ (Morry and George) “Chiffon and Taffeta Dress” (c. 1915), a vivid red item with silk skirt and a lacey bodice. Complex patterning and embroidery characterize many of the dresses and gowns of the period, extensive workmanship implying higher prices and, thus, the wearer’s prestige.

Beginning with “Nature and Place,” the exhibit concentrates on function, not exactly clothing for lumberjacks, but definitely designed with cold winters, rainy days and weekends away in mind. A khaki hiking outfit from the 1920s and a woolen ski ensemble of green stripes and black pants from 1948 express this pragmatism. Men’s one-piece ski outfits first appeared in the 1980s, preceded by rain-resistant materials and ski clothing made of stretch fabric pioneered by a short-term Northwest resident, designer Emilio Pucci. While attending Reed College he had the idea of using stretch fabric for the school’s ski team uniforms. By 1962 Count Pucci was the featured guest at a Seattle Symphony charity ball which highlighted his signature designs of gyrating patterns on printed silk, as in “Silk Cocktail Dress” (1970s).

In “Growth and Aspiration,” the backward child of West Coast fashion put forth dubious breakthroughs. There was the Filson Company’s “buffalo-plaid” “Wood Mackinaw Cruiser Jacket” (1914/2013), which influenced the Grunge look of the 1980s, with its strategic tears and rips. Also present is the gay clone look worn by the disco group Village People (among others) in the 1970s. Late Nirvana singer and Grunge icon Kurt Cobain’s coat is on view, attracting legions of fans. During the early 20th century affluent women displayed the city’s first haute couture designs by Elsa Schiaparelli, represented by an overall printed butterfly gown in which the butterflies appear to cover the wearer’s body. Mariano Fortuny’s pleated silk dress was worn by the city’s first art dealer, an African-American woman, Zoe Dusanne. Former MGM executive costume designer Irene Lentz’s “Evening Gown with Taffeta Bow” (1955) was a dramatic acquisition from the Designer Room at Frederick & Nelson, locus of in-the-know fashion mavens.

“Innovators and Rule-breakers” should be the most interesting section, but is significant mostly for Eddie Bauer’s “Skyliner Down Jacket” (1936), Outdoor Research’s padded “X-Gaiters” (1981), improved mountain climbing boots, and of course, the aforementioned people’s fashion, Grunge. Marc Jacobs, Perry Ellis and even Karl Lagerfeld fell in line with the tears, long johns worn under shorts, and relentless red-and-black plaid. As a result, “Seattle Style” ends not with a whimper but a bang, the sound of Cobain’s rifle shot that ended his life. Seattle’s best-known fashion innovator’s biggest clothing inspiration turns out to have been Goodwill.