“Show Me as I Want to Be Seen”
The Contemporary Jewish Museum, San Francisco, California
Review by JD Beltran 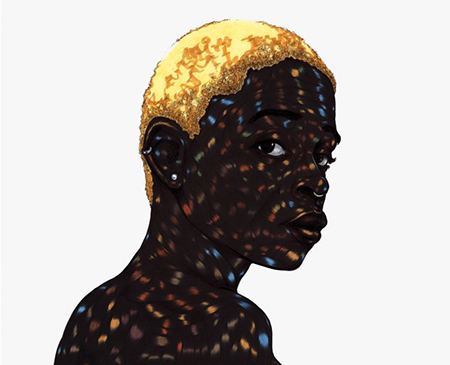 Rumor has it that Lady Gaga is a hermaphrodite. A curious rumor, for sure, but more curious is our reaction. If Lady Gaga is someone who may possess both male and female physiology — how does that change our perception of her?

This little exercise, jarring us into what curator Natasha Matteson deems “productive confusion,” aptly sums up the magic of the art of “Show Me as I Want to Be Seen.” The exhibition assembles the works of Claude Cahun (Lucy Schwob) and her partner and collaborator Marcel Moore (Suzanne Malherbe), along with ten other artists to highlight how society trains us to build the narratives of gender, race and culture that we all create in ourselves. Many of these narratives lie deep in our subconscious, evolving there since we were children. We don’t even realize it.

Cahun and Moore counteracted such bias in their pioneering artwork, using as a primary tactic what might be seen as states of denial. Based out of Paris in the 1920s and 30s, and publicly presenting themselves as male, their work tapped into mystery, symbolism, abstraction and humor to deny their given names, deny their genders, but probably most important, deny their audiences even the smallest opportunity to arrive at a conclusive story of who they were. In the exhibition notes Mattheson observes, “Illegibility can be seen as a powerful tactic.” And Cahun once wrote she believed her role was to “embody my own revolt.”

The hallway leading to the exhibition, papered with images from their illustrated book “Aveux non avenus” (1930), offers a taste of what’s in Cahun and Moore’s visual toolkit. Illustrations include collaged cutouts of lush lipsticked lips, masked faces and truncated limbs. It’s a fitting vocabulary, offering us a primer on what is to come. Particularly prominent are eyes, big and small, which typically stare out at you. In so much of their work, Cahun and Moore’s “male gaze” delightfully twists this very concept into a pretzel.

Among the contemporary artists included, Toyin Ojih Odutola and Zanele Muholi take approaches that counteract those of Cahun and Moore. Their work illuminates the sad reality that when one’s skin is black, the dominant implicit narratives of identity begin to flow immediately. Someone with black skin can’t hide behind ambiguity. In their works, both artists heighten the effects of cultural biases by deepening, even more, their already black skin.

Odutola’s portraits are a revelation. Who would have thought works made by using ballpoint pens and ink markers could rival the uncanny realism of a Hans Holbein portrait? The subject stares out at you, their eyes meeting yours. It feels as if they are actually sitting there. Black ballpoint ink, applied in layer upon layer, appears almost luminescent, contrasting magically with the deep ebony of the flat marker pen. While old masters used the technique of glazing to create the illusion of depth, Odutola ingeniously has evolved old-world glazing techniques using the 20th century material of Bic pens.

Where the exhibition truly shines is in Matteson’s juxtapositions of Cahun’s art, created almost a century ago, with her contemporary counterparts. Matteson seizes upon clever affinities between works, with choices that prove extremely rewarding. In one photograph from 1928, Cahun turns from a mirror to gaze at us, her pale, deadpan face framed by a high-collared, checkerboard print coat. Next to this photographic miniature is Zanele Muholi’s huge photographic self-portrait, her face — already dark — an even more saturated inky black, and also framed with a huge black collar punctuated with a white edge. In both images the subject gazes defiantly at the viewer, daring us to figure them out.

The sculpture-based works are standouts, offering physical manifestations of the conflicts at hand. Davina Semo captures random snippets of passerby’s conversations, which she translates into poetic marriages of sculpture and text. “A GREAT THING IN HER LIFE IS THAT SHE HAS A SECRET” (2018) is a 3” thick panel of pigmented and reinforced concrete, stainless steel pipe and broken auto glass. One can only imagine the story behind this equation of materials.

Artist Young Joon Kwak’s “Hermaphroditus’s Reveal I,” centered in the main gallery, offers a brilliant sculptural summation. This surrealistic work is a giant, vertical, flesh-toned loop of ribbon, done to the scale of a human body, that balances on the floor. On one side, the corners end in two human hands, as if holding it up in a handstand. At the other end, however, a disembodied, perfectly manicured hand lifts up the ribbon’s edge as if to reveal what’s underneath. This curious form, imbued with symbolism of skin, secrets, hands, fragility and balance is simply breathtaking.

“Show Me As I Want To Be Seen” shakes us out of our subconsciousness into empathy. Cahun once remarked, “Under this mask another mask. I will never be finished removing all these faces.” Although seemingly cosmetic, the masks symbolize the protection necessary to shield against the sometimes devastating consequences of societally imposed narratives. Acknowledging the courage of this work, Matteson observes, “Within the risk lies the potential to protect and empower others who share that identity.” These artists remind us that at times deliberately confusing the narratives — while taking necessary steps to feel comfortable and safe in one’s own skin — can be absolutely essential to one’s survival.