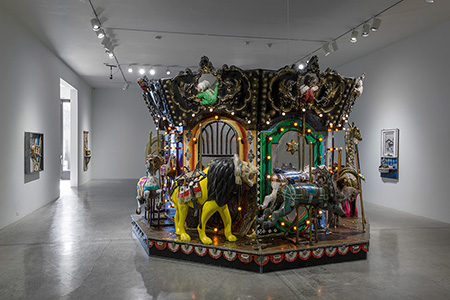 There’s a startling though sad visual double entendre that surrounds this multi-faceted, playful, yet deadly serious exhibition of the late husband and wife team of Edward and Nancy Kienholz. Just as it presents as its centerpiece a room-sized assemblage/collage of a wildly colorful and elaborately crafted carousel, so too has the piece fully circled back from the first of numerous times it has been exhibited since 1992. A mythic L.A. figure, who in 1957 co-founded the Ferus Gallery, Ed Kienholz (1927-1994) is also considered one of contemporary art’s avowed masters of the assemblage/collage/installation genre. Starting in 1972 he would make art only in exclusive collaboration with his wife Nancy Reddin Kienholz. Nancy, born in 1943, died this past August, just weeks shy of this exhibition’s opening.

The inspiration for “The Merry-Go-World or Begat by Chance and the Wonder Horse Trigger” came after Nancy encountered a poor woman asking her for money in 1983 on a Juarez, Mexico street. By her own account, her refusal to comply triggered feelings of shame that persisted for a long time. The name “Trigger” in the title evokes that moment, and also refers to TV cowboy Roy Rodger’s horse, whom Nancy through a family contact had the opportunity to ride during her what she has described as a privileged L.A. upbringing.

A decade later the more salutary insight inspired what we see here, a meditation on the reality of everyone’s existence and the circumstances into which they are born: their parents, social position, economic status, home country, gender, personality, appearance, etc. It all boils down to nothing but random chance metaphorically expressed. With a driving performance/conceptual art/happening-like energy, the artists (via printed directions) instruct us to spin a wheel of fortune at the carnival entrance to the transformative carousel. Walking through the pitch-black portal we experience a leap of faith into the unknown which acts as the catalyst that fertilizes the work into being — and action!

Once inside, a (comfortably) disorienting fun-house environment presents a flashing lightbulb that “randomly” illuminates one of the eight small glass-panels that line and configure the room into an octagonal circular shape. At once theatrical tableaus of people and haunting retablos of the objects that complement their lives, these inner quarters become a series of splintered, narratively-lace kaleidoscopic stage settings. Each one tells its tale through a compression of photographs and shattered doll-like figurines surrounded by the weathered books, pocked and aged furniture and fences, fossilized and crumpled cigarette packets, indeed a whole decrepit collection of detritus that signals if not symbolizes the range of the socio-economic register which these characters inhabit. The intended realization is that “any one of these people could be me” (seven of the eight installations reveal people living in varying degrees of economic hardship), while the classic amusement park and carnival music playing inside the room intoxicates a feeling of a surreal state of both dread and wonder.

One exits the installation not relieved that you may have been luckily born into “better” circumstances, but with a bolstered sense of empathy and a deeper connection to the mysteries of life and its DNA vicissitudes. In the beautifully produced full-color catalog produced by the gallery, Ed and Nancy explicate the stories of the individuals in the tableaus, how and where they encountered them and the details of the sometimes-complicated process of bartering for or otherwise procuring the objects that would ultimately comprise the work itself.

A selection of mixed media assemblages surround the carousel and hang from the gallery’s walls. Exquisitely tender, lyrical and relatively light in tone and feeling, they cast light on the people and their living environs that we’ve encountered in the carousel’s claustrophobic booths. These wall pieces, however, do not compete with the carousel’s central position aesthetically and within the gallery, but rather serve to square that edifice’s circular architecture. While squaring a circle may be a mathematical impossibility, for artists like these two it proves anything but. Indeed, the Kienholz’s magical show excavates the ancient dilemma of the Philosopher’s Stone and flints it into releasing a stream of socially conscious and responsive energy, the kind we need to heal our world. Welcome home.