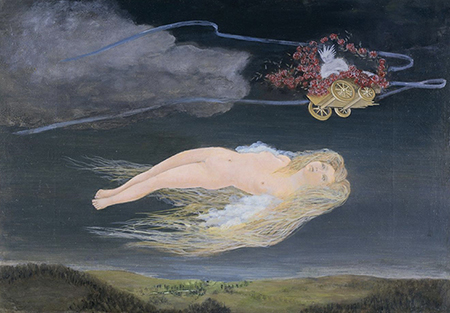 Although Meret Oppenheim’s prolific career spanned half a century, many still think of her as a “one-hit wonder” for her early Surrealist icon, “Object,” a fur-lined teacup, spoon, and saucer created at age 23 (not included in the show). This extensive exhibition, the first major transatlantic retrospective of Oppenheim’s work in the U.S., definitively puts that idea to rest. Apart from one period of what the artist called a crisis of self-doubt at the start of World War II that lasted until 1954, Oppenheim was a prolific artist who constantly experimented with various materials and concepts reflective of her wide-ranging interests, including nature, mythology, gender politics, and dreams.

Born in 1913 in Berlin to a German father and Swiss mother, Oppenheim      moved with her mother to Switzerland when World War I broke out in 1914. In 1932, at the age of 18, Oppenheim moved to Paris to study art. Initially she took classes but later taught herself through visits to museums and galleries. She met Alberto Giacometti in the fall of 1932 and became involved with the Surrealists, but never fully identified with them. A year later, she showed her work in the Salon des Surindépendants alongside more established Surrealists. She had a yearlong love affair with Max Ernst, posed nude for Man Ray and became close friends with Marcel Duchamp in 1935.

While in Paris, Oppenheim focused primarily on narrative paintings and drawings, and about 40 pieces from the 1930s and 1940s are included in the show. “Stone Woman (Steinfrau),” a crayon drawing on newsprint from 1937, developed into an impressive painting the next year. The figure reclines on a beach with her legs immersed in water, its transparency and rippling currents depicted convincingly. “The Suffering of Genevieve (Das Leiden der Genoveva)” from the next year takes a female figure from German medieval legend. Oppenheim painted this subject frequently. One theory suggests that she identified with Genevieve, who was banished from court and hid in the woods after her husband wrongfully accused her of infidelity. Perhaps Oppenheim was channeling her resentment at having to leave Paris in 1937 as her parents were no loner able to support her. In this painting, Genevieve floats above the landscape buoyed by a cloud, while a crowned figure above seems to be taunting her. Oppenheim often focused on female figures in her work, fully cognizant of the gender bias at work in the male-dominated art world.

Oppenheim initially supported herself in Paris by making fashion accessories, selling rings, fur-covered bracelets and other objects to French designers. After she returned to Switzerland, she worked as an art conservator, producing little art for more than a decade. She entered a new creative phase in 1954 when she took up painting again, turning her focus to the cycle of life, death, and rebirth. In the 1960s Oppenheim experimented with three-dimensional sculptures and constructions, bringing “Ma gouvernante — My Nurse — Mein Kindermädchen” to fruition in 1967 after conceptualizing it in 1936. A pair of white pumps are bound and trussed like a chicken and presented on a silver tray in an assemblage that reflects Oppenheim’s attitude regarding women’s objectification by men. A large sculpture from 1959, “The Green Spectator” is a significant piece that Oppenheim had sketched out while in Paris and finally constructed from limewood and copper. An obviously female figure, it is inert and passive, able only to observe but not interact with her surroundings.

In the early 1960s, Oppenheim’s work became more abstract and geometric. In “Under the Raincloud” (1961-64) a layered cloud of flat rectangular shapes hovers above three cylindrical tree forms. “Enchantment” (1962) contains overlapping circles and crescent moons. And in one of her largest paintings, titled “New Stars” (1977-82), the stars are large diamond shapes in red, orange and yellow. The last gallery is dominated by 12 large drawings from 1983 called “My Exhibition.” The drawings are of earlier artworks, and were done as illustrative studies for an earlier retrospective.

Two years before she died, the artist planned a retrospective of her life’s work that opened in September 1984 at Kunsthalle Bern. She selected and carefully drew 200 works of art in pencil and colored pencil on large sheets of paper before working with the museum to install the show to her specifications.

Oppenheim died at age 72, never losing her self-described “sly sense of humor and taste for the macabre.” Her work was always unconventional and not easily categorized, which was how she preferred it. She strenuously objected to being classified as a Surrealist, Dadaist, Pop artist, or Nouveaux Réalistes. She went wherever her vivid imagination and inquiring mind led her, saying in an interview with journalist Frank A. Meyer in 1983, “Committing to a particular style would’ve bored me to death.” Earlier she asserted, “Nobody will give you freedom. You have to take it.” Oppenheim took her freedom, refusing to conform to anyone’s vision but her own.