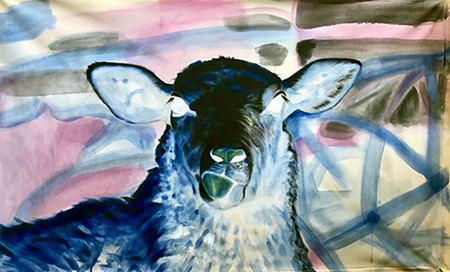 Asked how he came up with the idea for “Negative Sheep,” Santa Monica based painter John Geary responded, "One late night in my studio I was smoking marijuana, lots of it, and I threw a sheepskin rug over two ottomans. It looked like a sheep with no head and two rear ends. I took the idea of a headless, two-tailed sheep and made ‘Push me, Push Ewe.’ It’s foam over a wooden armature covered in sheepskin with sculpted bronze legs." “Negative Sheep,” three of these ambiguous and uncanny headless animals, two white and one black, thus became the exhibition’ title. The trio are positioned as if grazing the concrete gallery floor. They are surrounded by more sheep — a range of colorfully drawn and painted animals, realistically rendered as well as more abstracted, all purposely kitschy interpretations of these innocent looking creatures.

While Geary's sheep are cute and appealing, it is impossible to view the exhibition without thinking of the trope "black sheep," as well as of “Dolly," the infamous clone created in 1996. Geary thus plays with the cliches associated with the species. A gifted painter, Geary has a deft hand and a knack for drawing and painting animals. His output has included large-scale renditions of wide-eyed dogs and cats as well as a series featuring gorillas and apes. These “Negative Sheep” can be interpreted as mutations, some based on anomalies like two-headed ewes or rams with four horns. Geary frequently begins by digitally manipulating and then printing out found images. He openly embraces the printing glitches that sometimes occur, using these color distortions as a jumping off point for his pastels and paintings. Often, he will create an inverse image, which led to the "negative," or black sheep works.

Another small-scale pastel, “Lamb in Daffodils” also conjures a feeling of innocence. Here, a pink-hued lamb is appears amongst yellow flowers and green leaves. The animal looks out at us with a expression of naive surprise. “Pixelated Sheep” comes in two versions — pastel on paper as well as a large-scale acrylic-oncanvas painting. Geary obscures the head and part of the body of a four-horned sheep by reducing these aspects of the animal to a grid of pixels.

Encircling the gallery is an array of painted and drawn, large and small, negative and positive depictions of sheep. This menagerie is both seductive and disconcerting. Seductive, as who can resist images of cuddly creatures; and disconcerting, as Geary includes sheep with mutations calling immediately to mind issues of climate change and genetic engineering. While Geary turns headless sheep into bench-sculptures, it is not far-fetched to imagine a future where headless animals are bred for human consumption. Geary's negative sheep, often portrayed as black or multi-colored, are welcome mutations that celebrate the notion of difference.