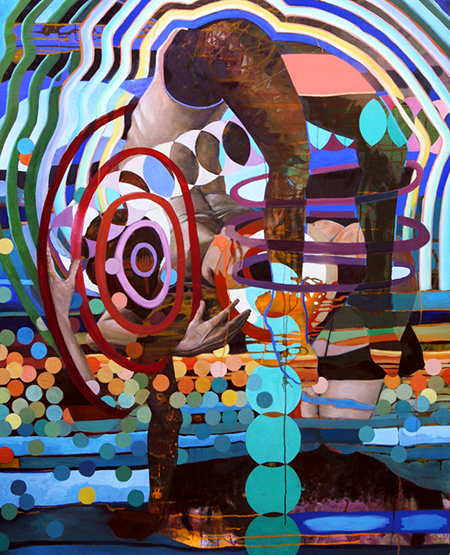 As the critical dialogue around abstraction continues to unfold, often hiding in plain sight is the unrelenting preponderance of figuration — human figuration in particular. Multitudes of artists continue to gravitate to the most recognizable form of self-expression and self-reflection, while art audiences continue to be held in sway by a new — or new to them — take on the familiar. Are the possibilities for imagery derived from the human form no less infinite than in the forum of abstraction?

Marty Schnapf, in addition to painting, has a background in choreographed performance — dance party, multi-media, video installation, concert, drinking game — the gamut. More recently he's returned to the gallery, both with installation and object-based work. In a recent installation, "Sculpture Drawing Sculptures Drawings," at The Property in downtown L.A., Schnapf filled the gallery with a diagonally oriented sequence of 2 x 4 wood beams, running from wall-to-floor-to-wall in V-forms, the white-painted wood methodically charred black at their central bends. Black lines on the floor, walls and ceiling further sectioned and bisected the room, with a group of drawings on the far wall. It appeared to be a somewhat immersive, albeit relatively minimal work, and for that it provides contrast relative to the nearly-over-the-top work he has slated for this new show.

A sculptural installation was originally planned for this exhibition. However, for spatial limitations (and perhaps in anticipation of having too many cooks in the kitchen, if you will), it was edited out. He instead sticks with a classically-oriented mix of objects, including five large paintings (one of them 16 1/2 ft. wide); three bronze sculptures on thick pedestals; and a series of graphite drawings (called “Lineaments") which will be installed as "free radicals," as Schnapf put it, directing the viewer's attention towards notably strategic vantage points that may or may not include the eight central objects.

The drawings and the bronzes share a fetishization of eye sockets. In the drawings, multiple pairs of eyes starburst out from a central core in a style reminiscent of the Futurists, though Schnapf is adamant that this comparison is valid only aesthetically, not philosophically. Nonetheless, the visual associations of Futurism are inevitable, as well as in the paintings. In the bronzes, the cascade of eye sockets in “Helmet" give way to a smattering of groaning mouth sockets in the two sculptures titled “Carapace," slightly repulsive spectacles topped off, in "Carapace 1," by two aggressive cone-like protrusions, and in "Carapace 2" by a far more overtly phallic form — a horn-morphing-into-phallus combo.

Schnapf's paintings contain an orgy of body parts and bodies, emerging from and bisected by cycling abstract patterns, whether ovular, circular or more hard-edged emanating sequences. Providing a look back on Schnapf's earlier pre-performance/installation period work is a painting from several years ago, characterized by a complex interlocking of colorful hard-edged bands. It’s reminiscent of Al Held's spatial geometries combined with Bart Exposito's stylish graphic design. Schnapf notes that he has oscillated back and forth between figuration and abstraction numerous times. Now the two co-exist, or perhaps collide, in a style most aptly referred to by the artist as "disco saturnalia." It's a dirty maximalism that's part orgiastic and part violence, but the profane, if there is any, is amply obscured by the abstract geometries, which act as interventions — or impediments — of sorts.

In the context of Schnapf's overall evolution, the questions that come to mind are: has he settled into a place of clarity and resolution with this grouping of studio-based objects? Or, one might wonder, after Schnapf's recent string of forays into performance, where the venue, let alone the mediums, were both unlimited and unrestrained by the bounds of the plastic arts: will such traditional restraints of object-making lead him to look back over his shoulder towards the electricity of the stage, in all its time-based drama and kineticism?