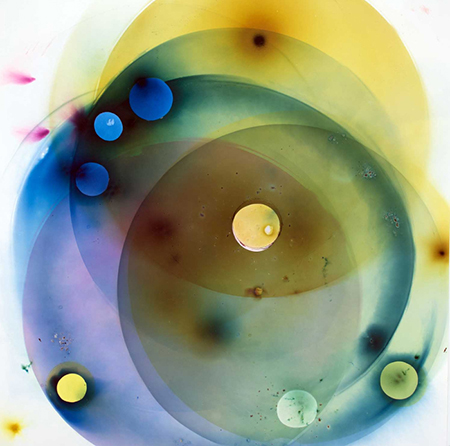 Organizing an exhibition that serves to educate, illuminate and serve as a repository of inspiration for the reverberations from August 21st’s solar eclipse is not an enviable task. A total solar eclipse, as this one will be, progressing along a NW to SE axis across the country, has not occurred in the continental U.S. since 1970. We in Southern California (and throughout the state, for that matter), will only be able to see a partial solar eclipse, which isn’t nothing, but it’s already been made clear to me that if I don’t claim a spot along that relatively thin swath that will bear the eclipse’s totality, I’ll be missing out on a deeply profound event.

Among the most spectacular visible natural phenomena — tornados, lightning storms, shooting stars, the aurora borealis — a solar eclipse seems to earn the greatest reverence, and apparently for undeniable reasons. As for “Eclipse" the exhibition, co-curator Stephen Nowlin’s expressed intent that the eclipse itself be part of the show, to whatever extent that’s justifiable, is a wise one. Whether the event — the experience of witnessing the total solar eclipse itself — could or should be considered ‘Art,' meanwhile, is absurd. Rather than getting hung up on labels or semantics, “Eclipse" should be able to be taken both as a celebration and a jumping off point. Whether we make a sojourn to the path of the eclipse’s totality or not, “Eclipse" will be a forum that feels more than appropriate, if not necessary, to learn, reflect, and to whatever degree possible on this more modest scale, experience.

In exploring the cultural history of solar eclipses, Nowlin addresses, in his exhibition essay, the 17th century London preacher Fulk Bellers, who, just prior to an eclipse there in 1652, warned his congregants of falling prey to apocalyptic paranoia for the so-called Black Monday (the day when the eclipse was coming). He instead advocated for the event’s “profound Christian symbolism.” As Bellers likened the eclipse to the divine, he also, Nowlin thoughtfully points out, “simply discarded one superstition and substituted another.” Among the ephemera included in “Eclipse" will be a scan, from the Huntington Library’s Rare Book Collection, of Bellers’ original poster, whose viscerally scripted headline reads: “THE LATE Eclipse Unclasped: Or the Mistaken Star-gazers UNMASKED.”

Other historical documents designed to charm include an original Harper’s Weekly cover, an engraving from 1878 depicting an expedition witnessing that year’s eclipse from the Snake River Pass in Colorado. Fast forwarding to present, or the last few years anyway, the show will employ the full aid of modern technology to simulate an eclipse’s players and dynamics, in particular eight-foot diameter projections of various NASA footage (from Earth and space) of the sun, moon and Earth. Such high-tech visuals are presumably here to edify more than to simulate.

The art to be included will range from a scan of a chromolithograph of the total solar eclipse from 1878 to a large-scale installation from the celestial-minded L.A. artist Lita Albuquerque that will be unveiled with the show’s opening. The other contemporary art inclusions are a nice mix of mid-sized pieces from artists more familiar (Russell Crotty) and less (Jacqueline Woods). Rosemarie Fiore’s "Smoke Eclipse #52," on paper (literally and figuratively), embodies the spirit of “Eclipse” as a jumping off point. Though it shares many aspects of a colored photogram, it’s actually made from lighting fireworks in a controlled system of the artist's devising. The residue produces overlapping planet-like circles, while the burn marks resemble something like sun spots. The performative act of the piece’s making is of particular significance in this context (of space, spectacular phenomena, etc.), as it’s scaled to our own modest reach, vs. competing, if you will, with its inspiration.

When it comes to celestial perspectives and acute attention to changes in light, you can’t not think of James Turrell (whose presence is felt despite his not appearing in the exhibition). For an exhibition exploring all things “Eclipse," Turrell's work may have been too spot on, unless perhaps you could witness the eclipse from one of his sky rooms. But still, don't try to compete with the real thing, which the curators of “Eclipse" appear to get. Understand it, honor it and be inspired by it, and if you can get to the event itself, by all means do so: it's part of the show.