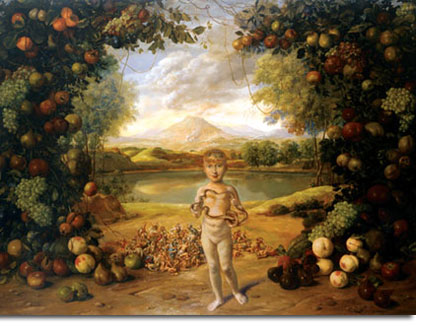 This past decade has witnessed an increasing number of catastrophic events and natural disasters, a virtual clash of the Titans, as man and nature have tried their best to outdo one another in a risky competition of destruction. While the often-tumultuous relationship between man and nature is not a subject born in the postmodern climate, here it has escalated into one of utmost importance. “Trouble in Paradise: Examining Discord Between Nature and Society,” at the Tucson Museum of Art examines the current state of eco-calamities setting man's interference of nature's rhythms against the increasing number of natural disasters occurring across the globe.

“The show started out really small, a nature-based exhibit, and from there took on a life of its own,” curator Julie Sasse explains. Ironically, the life it took on was an investigation of decay, of the deteriorating state of the natural environment. A recipient of the Sterling and Francine Clark Art Institute Fellowship, Sasse traveled to Massachusetts last year to work on the exhibition catalog, an experience she recalls being an emotional paradox, “how can I write about the apocalypse while I am surrounded by such a beautiful setting?” A similar contradiction makes its way into the exhibition, as the power of nature is juxtaposed with the fragility of the ecosystem.

This ambitious exhibition brings artists from across the United States and the international scene to Tucson, and what became known at the museum as “Julie’s disaster show.” Sasse, herself an artist, describes her own work as a visual response to the world around her. Likewise, with “Trouble in Paradise” she brings together a multitude of voices, speaking their concerns in languages as diverse as painting and digital video, photography and sound installation, mixed-media and mutoscope, an early motion picture device. Sasse emphasizes how renowned photographers Edward Burtynsky and Richard Misrach have a “global resonance” and yet speak to the same concerns held by local artists depicting the impact of drought, over-fishing, and pollution have had on the environment of Arizona. While not pretending to change the world, these artists are intent on exposing the issues, bringing a new perspective to the “very real and serious trouble” that is broadcast in increasingly clichéd soundbites on the nightly evening news.

While the debate over the photograph's ability to “aestheticize” disaster will no doubt continue, the evidence they contain is hard to ignore. Edward Burtynsky's Oxford Tire Pile #8, features a divided mountain of tires, white-walls included, a contemporary vision akin to the parting of the red seas. That these tires have since been relocated and shredded or burned (another eco-friendly solution, to be sure) provides little comfort, knowing there's plenty more where they came from. DoDo Jin Ming provides a markedly different approach in her black-and-white photographs of a storm at sea. Ming utilizes separate negatives to construct her turbulent images, where the heavens become as threatening as the churning deluge. The competition between man and nature becomes one of sky and sea, and their battles promise to obliterate anyone caught in between.

The seemingly-direct rawness of photography starkly contrasts against what Sasse describes as the “seductive quality” of the painted surface. There is a guilty appreciation of beauty to be found in Kirkland’s momento mori still-lifes featuring endangered and extinct species with a luminosity rivaling the luscious verism of the Dutch masters. Although the historical works combine a fascination of nature with a treatise on time and human frailty, these works, instead, subtly evoke tragedy and regret. While also referencing historic genres, Julie Heffernan’s Self-Portrait as Astynax, creates an amalgamation of mythological and biblical themes. At first seeming to reference Eve’s well-known interaction with a certain serpent amidst the lush bounty of the garden, the painting’s title, instead, recalls the tragic figure from Greek mythology. But what initially drew Sasse to this work was the smoldering volcano set in the distance, suggesting that even in our paradisiacal origins, trouble of a different nature was just around the corner. Focusing instead on contemporary crises, Julie Criles’ Encrusted Tar presents what Sasse accurately designates as a “crisis of place,” the Iraqi oil fields set ablaze in 1990-91, marking the largest intentional man-made ecological catastrophe to date.

Throughout the exhibition, Sasse broadens the discussion to include not only the ecological issues at hand, but also how these concerns are disseminated through the media. “When artists use such icons of disaster,” Sasse explains in the exhibition catalog, “they comment on how environmental discord is packaged and delivered to us through the Internet, television, and print media.” An installation by Heather Green embodies this discussion using modified mixed-media mutoscopes, illustrating not only the effects of over-fishing on the local population, but physically signify the mechanics of mediated vision; while Thomas Ruff’s pixilated photographs of natural disasters refer to the distortion, manipulation and omission of information, as they are magnified beyond their ability to present any details with clarity. These works, in Sasse’s words, not only “bear witness to the actual events, but become a critique of our information systems and our reliance on increasingly filtered information.”