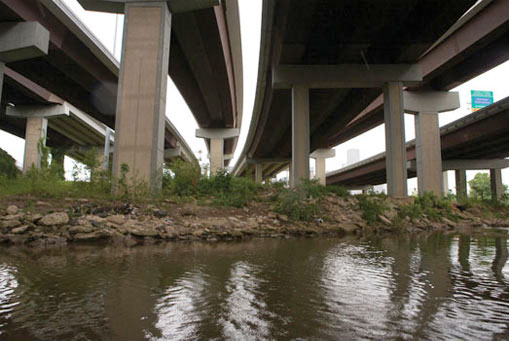 The Center For Land Use Interpretation, or CLUI as it is more commonly known, resists moralizing about the environment. Founded in 1994 by artist Matthew Coolidge, the organization functions at the nexus of art, urbanism, and environmentalism. Not quite an art collective or cordoned off group of scientists, the Center for Land Use Interpretation has enjoyed tremendous acclaim within arts communities (the organization was included in the 2006 Whitney Biennial), due in no small part to the organization’s conceptual underpinnings and tendency to mine the look of vintage Americana in the service of conceptual art and science. CLUI’s aesthetic is more like a dusty old office full of cool books, pictures, and maps than the organic, streamlined shapes of much contemporary eco-inspired architecture and design. Harkening back to the institutional penchant for instructional films in the 1950s and ‘60s, the center presents dispassionate yet informative photo presentations on environmental themes, such as waste management and oil production, at its Culver City office, an unassuming ground floor space on Venice and Bagley adjacent to the equally mysterious Museum of Jurassic Technology. Their recent exhibitions, “Post Consumed: The Landscape of Waste in Los Angeles,” which opened last May, and “The Trans-Alaska Pipeline,” which opened November 14, 2008, both garnered high praise.

The peripatetic organization uses the entire United States as its playground. The center currently has six sites in the United States: the main office in Culver City; a satellite office in the graying factory town of Troy, New York on the Hudson River; the impressive and expansive American Land Museum, on the periphery of the salts flats of Wendover, Nevada; another office housed in an old junk yard in the industrial fringes of Houston; and finally, the Desert Research Station in the Mojave, a research and exhibition facility that functions as a satellite to the Culver City Space. CLUI supplements their extensive infrastructure with touring shows: “Texas Oil: Landscape of an Industry” is currently on view at University of Houston and “Worlds Away: New Suburban Landscapes” is showing in Pittsburgh.

At first glance, CLUI’s exhibitions can seem ambiguous and difficult to gauge. Their detached stance borders on mysterious, partly because CLUI is not trying to push an explicit agenda other than “understanding the nature and extent of human interaction with the Earth’s surface.” Rather than directly lambasting social ills or positing utopian visions of the future, the organization explores America’s infrastructure and developed landscapes in rigorous detail. Everyday objects are presented on pedestals and classified with placards in their exhibition spaces and video, and their photo-presentations are always devoid of leading commentary. While the guise of complete objectivity is naïve, if not impossible, CLUI’s mode of presentation does enables its audience to understand post-industrial landscape as an ecosystem in its own right. The main interest of Coolidge and his team of geomorphologists, environmentalists, scientists, architects, and scientists lies primarily in cataloguing industrial ruins and the hidden places that nonetheless greatly impact our daily lives. In other words, CLUI does not seek to bring nature closer, but to explore human interventions in natural landscape.

They do so through a diverse program that encompasses multiple exhibition spaces, site-specific works, a quarterly newsletter called The Lay of the Land, and a thriving publishing series dedicated to exploring the urban fringes of the United States and military test sites. Think Mike Davis makes field guides. “Overlook: Exploring the Internal Fringes of America,” one of CLUI’s most popular titles, is a curated guide to the American landscape that explores sites they believe are “windows into the American psyche.” You may be able to find some of the show caves and ghost towns CLUI visits on tourist maps, but you’d be hard-pressed to find the pit mines, soap factories and landfills that comprise most of the journey. As “Overlook” suggests, CLUI doesn’t shy away from a good old-fashioned field trip. The organization has orchestrated trips to potato chip factories, abandoned launch pads, and power facilities and a visit to a waste facility was offered as part of last year’s “Post Consumed,” which chronicled the life of consumer waste from curbside to landfill through documentary videos, and by isolating and classifying common pieces of garbage. One of CLUI’s slyest site-specific works is Suggested Photo Spots, an ongoing riff on Kodak’s signs at national monuments and parks. Initiated by artists Melinda Stone and Igor Vamos back in 1997, the project involves installing signage at such unlikely points of interest as wastewater treatment centers and the Kodak headquarters.

CLUI exists in the hazy area between art and pedagogy that is becoming increasingly popular both in Los Angeles and internationally. Their stark, holistic approach could alienate viewers looking for an easily digestible call to action. However, their rich investigations of industrial, urban and suburban spaces is minimal, direct and revelatory, without the sensational or trendy modes of presentation that we sadly find so often in socially or politically based works.