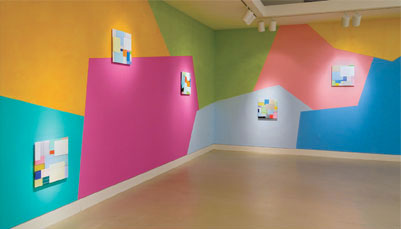 From outside, the Torrance Art Museum is a nondescript one-story building tucked into the Torrance Cultural Arts Center on the city's sprawling civic center campus. Parking on one side of the museum competes with the police department, whose posted signs seem more a warning than a welcome. Follow the colorful exhibition banners down a short sidewalk to the light-filled entrance to the museum and the bureaucratic beige of the city's administrative buildings is abruptly abandoned.

Curator Kristina Newhouse joined the Torrance Art Museum in late 2001 at the start of a massive renovation project that was only completed in 2005. Newhouse has long been an active contributor to and commentator on the arts in Southern California, and brings incredible breadth of knowledge to the program at Torrance, curating shows that present important themes in the art of Southern California, or even push for the establishment of new trends.

To most observers of the arts in Southern California, the South Bay does not come to mind as a particularly fertile artistic community. Newhouse believes that the municipal gallery must strike a balance between catering to the community's residents and attracting visitors and artists from outside the region. Newhouse says, 'The local audience is not exposed to a lot, so some of our programming is about giving local people an education in art, bringing them up to speed in regard to contemporary art practice. But you also want to bring in the Los Angeles audience. In trying to build the momentum of the museum you really need both parts.'

The Torrance Art Museum's current suite of exhibitions does just that, offering visitors a variety of takes on contemporary abstraction by three Southern California-based artists. Leading off the bright atrium is a corridor exhibition space, called the 'South Bay Focus,' reserved for artists working in the South Bay. This fall, this space was occupied by large-scale pastels on paper by Mary Pichette, a Carson resident who has recently returned to her art practice after many years' hiatus. Pichette's drawings are inspired by the forms of light and shadow found in nature, but her palette veers into an almost Fauvist interpretation of southland flora; deep jade and mossy gray verdure are highlighted by large swathes of magenta, mauve, and sherbet orange.

Pichette is also a member of the local artists' group. Although she earned her BFA from UCLA, Newhouse feels that Pichette's regional connection enables local visitors to identify more closely with her work.

Pichette's work provides a gentle introduction to the more hard-edged brand of abstraction practiced by Italian-born, Hermosa Beach-based painter Marco Casentini. Casentini's exhibition, 'Have a Nice Day,' has completely transformed the museum's Gallery Two project space into a giant tangram puzzle which echoes the pure and joyful colors of Casentini's series of a dozen acrylic paintings on Plexiglas. Casentini celebrates the buoyant colors of his new home with frank adulation, layering and abutting them on recto and verso of his Plexiglas squares. The architectonic construction recalls Hans Hofmann, but Casentini's colors are cooler, grounded by variations on sandy orange or salmon pink.

At the other end of the building, in the museum's main gallery, Eric Johnson's sculpture also explores the purity of color and form. But his abiding muse is material. For The Maize Project, Johnson invited friends and neighbors from his San Pedro community to each create a single kernel of cast polyester resin, which he then assembled for this large work. The resulting structure is 14 feet tall and consists of more than 300 individual units. The brilliantly colored pieces appear luminous in the large airy gallery space which is lit partially by natural light. Contributors to the sculpture colored their pieces with dye, filled them with glitter, or embedded objects (dominoes, dead wasps, and coffee beans, to name only a few) within them. Newhouse says that the individual stories behind these pieces 'have really struck a chord with people. You can see how idiosyncratic each piece is and viewers really connect to it in that way.'

The show also highlights a wide range of Johnson's earlier work, confirming the sculptor's acuity for the medium and his extraordinary ability to create works that vacillate between emphasis on volume and surface. Hototo (1995), the earliest piece represented in this exhibition, is an amber-colored wall-mounted sculpture that holds its shape with a simple network of thin wooden struts. Abandoning the interior structure in his later works Johnson concentrates on surface concerns. The red luster of his 2001 Binary Study System suggests a bubble of nail polish, but Johnson breaks its perfect exterior shell with four kidney-shaped holes that reveal a smooth creme de menthe-colored interior.

These three exhibitions weave a thoroughly satisfying narrative about contemporary abstraction in Southern California and reveal that the balance that Newhouse aims to strike between the local amateur versus the art-savvy audience provides more fuel for creative resonance rather than conflict.