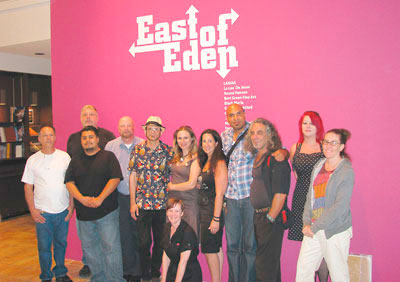 “We’re actually getting a lot of heat for calling it ‘East Los Angeles,’ says gallerist Leora Lutz, of the string of disparate neighborhoods represented at LA’s Barnsdall Park from September 19-21, at the decidedly funky invitational art show called “East of Eden.” “We’re basically an unnamed clump of neighborhoods... The fact that we’re not in a central hub, we have to make more of an effort, to literally make a map to show what goes on here.”

Wandering the airy hall, one could see a spectrum of genres and styles: on Junc’s wall, delicate watercolors of mushroom-birds by Amy Ross gathered like a dreamlike forest undergrowth, while Pop Surrealist maven Billy Shire lounged nearby at La Luz de Jesus, beside an eerie video of forlorn mutants by Chris Mars. Around a corner, Materials & Applications offered an upside-down plastic hobbyhorse mounted on the ceiling by Eddy Sykes; neatly quartered, the sections could be manipulated via a lever like a geometric finger-puppet. Leora Lutz of Gallery Revisited—which was based on Sunset Boulevard in Silverlake until July of this year, when she shut its doors and reconceived it as an online presence—showed three artists with very different styles, from Elana Kundell’s oil abstractions to Michael Hsiung’s stylized ink sketches. “There is very good art out there that is not necessarily from the grad schools,” Lutz observes of the range of artwork displayed in the show. “Some of them don’t feel like they fit in with lowbrow or whatever.”

In fact, the galleries in the exhibition are not only united through a sense of being geographically marginalized, but also by showing work that is outside the mainstream. Even the gently plaintive name of the show suggests a form of exile from the presumed garden of cultural and mercantile abundance further west in Culver City or Bergamot Station. Notes Zara Zeitountsian of Black Maria on Glendale Boulevard in Atwater Village, who was the prime organizer of the show: “We didn’t want to be self-victimizing, but we are outside the radar... Not only in terms of where we are geographically, but also in terms of genre, or the types of art we’re showing. It’s not necessarily underground anymore, but it’s not really mainstream.”

It was Zeitountsian who originally devised the idea last October, through her involvement with MOCA Contemporaries. “I asked them to do an artwalk on the East Side, and in doing so, realized it was impossible to do an artwalk on the East Side,” she recalls. In the end, MOCA Contemporaries became a beneficiary of the show, receiving ten percent of sales and a cocktail reception. Another supporter was City Councilman Eric Garcetti, who helped Zeitountsian with financial assistance as well as the necessary permits and fixtures. Says Lutz, “It was different than an art fair; galleries didn’t pay to be in it, so we really pulled things off on a shoestring.”

With an estimated attendance of 1500 - 2000, this inaugural show was small by art fair standards, but a significant symbolic step in the banding together of these unaffiliated galleries, which as yet remain off the beaten path, spread across the righthand side of a city map like a spray of brilliantly colored beads. As such, “East of Eden” was the first incarnation of what many hope will become an annual affair. “That is what we’re hoping for,” says Zeitountsian. “We don’t know how it will evolve, whether it will be more of an art fair format, or an exhibition like it was this time, whether there will be submissions, or a curatorial committee. But we feel it was very much needed and appreciated.”