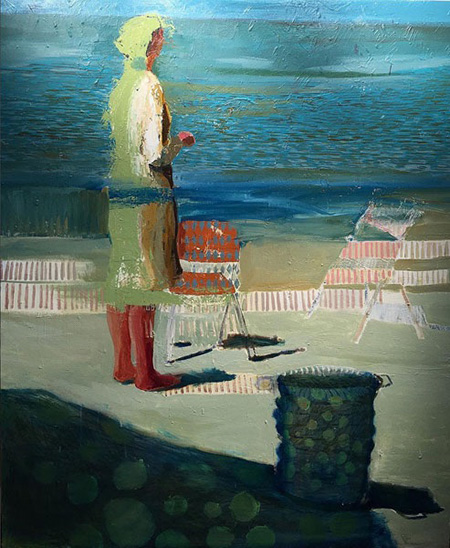 Pairing the paintings of Mark Beck with those of Linda Christensen is to bring together two artists whose work addresses — in different ways — strong emotions and ambiguity. Beck (“Untold Stories”), inspired by the work of Edward Hopper and other veterans of the American Realist art movement, depicts classic American buildings and other familiar structures. Christensen in “Bring to Light” uses more gestural brushwork, often-faceless women going about their daily activities, and their aloof and pensive stances to convey loneliness as well as humanity.

Beck’s “American Neoclassical” depicts a brown-shingled house with sloping roof in a country setting. The image is redolent of some of the moody paintings of Millard Sheets. Suggesting a bygone era, it expresses serenity, belonging, rootedness and even sad memories. “Crumbling House,” a close-up of a similar structure that is falling apart, goes further in metaphorically portraying neglect and decay in our world today. Two paintings that convey a nostalgic tone, “The Leaving” and “Way Up North,” are of small buildings, perhaps homes for fisher-people, alongside and in a tranquil ocean, with horizon lines in the distance. By harmonizing man-made structures with nature, and by using primary colors to portray these scenes, Beck creates a romanticized version of American life.

The artist’s “In the Breach,” “In the Beginning” and “Forever Yours,” each illustrating a singular red boat in or near the water, suggest a humankind that is adrift in the world. “The Candle” goes further, showing the back of a woman’s head as she sits on a sofa, looking off to a cloud-filled sky. As with others among Beck’s paintings here, the image functions as a metaphor for life as so many people experience it today.

Christensen’s semi-abstract paintings display the influence of Bay Area artists Richard Diebenkorn and David Park. In fact, the latter’s figurative work illustrating people served, early in her career, to reveal her needs, emotions and personal authenticity in her paintings. “Passenger” presents a woman in transit, seated with chin in her hands while deep in thought. Various shades of red in the painting convey deep emotion. “Reclaim” depicts a singular woman seated on the beach, looking longingly at the ocean. In “I am the Ocean,” a standing woman again looks out at the ocean, while the title suggests her possible desire to merge with the great beyond.

In Christensen’s “Pause,” a woman kneels over a pond, filled with large fish. Yet her eyes are half closed as she gazes dreamily into the distance. Similarly, “Respite” shows a woman relaxing while looking off into space. In ”Leaving,” the lead character takes a more defiant stance, as she walks away from several people behind her.

Christensen’s work, while illustrating the everyday behavior of women, expresses their deeper emotions, even tending toward their streams-of-consciousness. She believes that humanness can be magical, that people, while engaged in daily activities, can reveal what she calls, “their own source, their soul, their gift.” Beck’s paintings, primarily of man-built structures harmonizing with nature, converge with Christensen’s as they similarly relate humanity’s engagement in life.