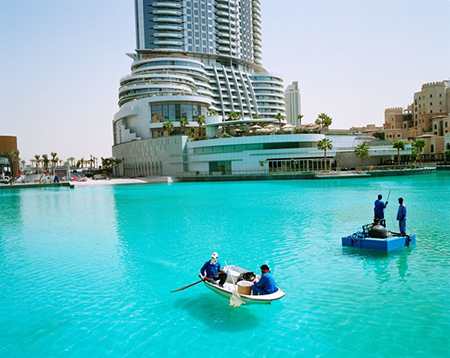 “Selected Affinities” are for the late photographer Allan Sekula, for whom the show is built around. Sekula, who died in 2013, was critically lauded for his documentary-based work, which was prescient in its charting of the rise of globalization, starting well before it became a concept familiar to the average layman. Alongside a specific grouping from Sekula’s epic series “Fish Story” (this one titled “Message in a Bottle”), four fellow Los Angeles-based photographers document workers and the working class, class divides and the darker side of capitalism. Geographically the images extend from Malibu to the United Arab Emirates, with Sekula’s eight-photo grouping flanked by narrative dogmatics that set the context.

Beyond this geographic span, “Selected Affinities” represents an ontology that ranges from visual immersion to a drier sociological inquiry. Miles Coolidge’s relatively large-scale (58 7/8 by 51 inches) triptych, “Mattawa” (#s 1, 2 and 3), is striking for its austere blandness. What initially appears to be construction-site trailers situated in the basin of a remote, barren valley turn out to be shipping containers that have been converted into migrant housing located on farmland in Washington State. Though the photos are hung several inches apart, the way they’re cropped teases out a sense of continuity, inviting us into a panorama while simultaneously thwarting it. With a dirt walking path worn into fading grass in the center photo, and square cement landings on either end, the only life to even be implied here comes in the form of a few shadows.

From that point in the show, mystery gives way to signs and symbolic contradictions. Connie Samaras’ series “After the American Century” is an unambiguous critique of late-capitalist globalism. “Dubai Skyline” conveys this rhetoric with a foreground dominated by transmission towers and power lines, a mid-ground with cranes and buildings under construction, and in the background, in a gray haze, the looming Burj Khalifa, currently the world’s tallest building. “Workers Checking Fountain Nozzles, 1” presents a paradoxical pairing of maintenance workers in simple rowboats afloat in a bright turquoise body of water that’s as big as a lake, butting up against the base of another high rise. We’re not in Disneyland anymore.

Katie Shapiro’s “Malibu Sandbags” series ( there are three in this show) takes on the (L.A.) home front with very simple means: by documenting three varying, artful sandbag configurations that purport to prevent erosion. More surreptitiously they serve to keep out the public and gobble up more beachfront property. Shapiro deftly sheds a new light on the locally controversial phenomenon among Malibu beach-front property owners. And these are literally pieces of work: #1 resembles a levy by-way-of a desert war barricade.

Billy Woodberry’s contribution is his film “Marseille Après La Guerre” (Marseille After the War), made up of a slide show from a cache of archival black-and-white photos and accompanied by straightforward narration and music by the Marseillais group Moussu Te lei jovents. Focusing on local dockworkers and the maritime subculture (the latter a major subject in Sekula’s work), Woodberry’s strategic editing, including a string of multiple portraits of dockworkers of African descent, sets up an ominous anticipation of the perils of segregation or worse, only to give way to images of the black and white workers existing, even playing, side-by-side, a heart-warming payoff for those with the patience to wade through otherwise dry archival imagery.

The show finally moves on to Sekula himself. His “Message in a Bottle” begins with an essay, mounted as a didactic that frames the grouping, a sort of deconstruction of the ideals of Captain Nemo, the tragic hero of Jules Verne’s “20,000 Leagues Under the Sea.” The photos themselves range from a fancy model ship on display in a jewelry store to an unhealthy looking dockside fire (which burns shipping palettes and who knows what else). As much as Sekula’s greater mission is a critical legacy for documentary photography and the investigation, in the realm of high art, of workers, the working class and class itself, all through the wider lens of (late) capitalism, in this case it’s a tough sell visually.

In our by now overly photo-saturated culture, documentary photography tends to be limited to telling a story at best, to simply illustrating it. Further hampered (as are Samaras’ and Shapiro’s photos) by the heavy reflections from the glass frames, “Message in a Bottle” ultimately comes across as academic. Even the most dramatic image, “unloading frozen fish from the Malvinas,” in which a dockworker, his eyes and his gloved hands reaching, like a conductor, towards the sky, is substantially underserved by its archival protections, leaving Coolidge, and to a lesser extent Shapiro and Samaras, to carry the torches of visual intrigue.