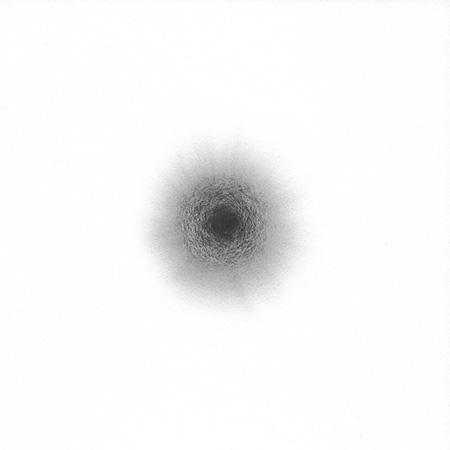 Nicole Phungrasamee Fein may have changed her methodical process of working, but her drawings are as meticulous and elegant as ever. She has been experimenting with a new method, an approach she describes as “water drawing” in which water carries the pigment — in this case iron oxide — as it moves across the paper. This new process, which is no longer controlled by a brush, reveals the way water behaves physically; hence the exhibition title, “Alluvial.” Because the circle is the natural form that occurs from a spreading droplet of water, more than half of the 23 drawings in the show are circular. The remaining pieces are square and reveal how an accumulation of drops can create different patterns and completely fill the picture plane.

One element that has not varied is the precise and focused manner in which Fein works. In her words, “When I draw, I make what feels like individual steps, marking the moments and maintaining a steady rhythm, as if I am walking.” The resulting works radiate a sense of calm. Fein’s previous work, with its translucent layers of watercolor applied with a brush, was much more controlled. “The natural flow of water has emerged as a guiding principle in the formation of each image, providing a sense of freedom that offsets the tremendous discipline required to create the work,” she writes.

The circular water drawings are small and intricate, with the pigmented areas occupying just a small portion of the 8-by 8-inch illustration boards. There is something molecular about these drawings, suggesting the need for magnification to reveal their minute details. The radiating forms also suggest a sun viewed during a total eclipse or dark stars silhouetted against a white ground. Three painstakingly drawn graphite-on-paper works are enlarged (30 by 30 inches) versions of the circular water pieces. Fragments of the intricate shapes and textures actually take on a three-dimensional quality due to the built-up layers of graphite. They are descended from the process art movement, which was more concerned with the steps to creation than the end result as the subject of the work, the creative act becoming the work of art. Fein focuses on the manner of creation rather than the visual images produced as a consequence of her actions. Although her materials may change, she says that “the challenge of articulating the singularity of the present moment continues to drive the work.”

Fein works sequentially in open-ended series, with each piece logically following the previous one. Certain things do not change from year to year, however, including the delicacy of the work and its inherent tranquility. Also included in the show are five pieces whose intricate patterns are the result of further experimentation with iron oxide suspended in water. For these, it appears that Fein has allowed the water to stand on a flat surface until it dries, creating distinctive patterns reminiscent of splattered drops of water on an oily surface. Five additional works seem to be the result of manipulating the iron oxide solution to flow across an angled board, creating a waterfall effect.

Initially these images appear uncomplicated, but co-existing elements of focus, harmony and tension evoke complex reactions. We can at one moment envision natural forces at work, the next focus on formal abstract qualities. Despite the Fein’s physically demanding technique the show does not feel labored, but rather an encounter with the ethereal and transcendent.