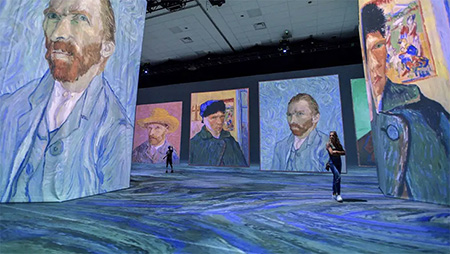 The technology has greatly improved since Nam June Paik created his 1993 installation “Sistine Chapel,” filling a darkened room with more than forty overlapping slide projections. Currently on view at the San Francisco Museum of Modern Art through October 3, 2021, Paik's “Sistine Chapel” can be seen as a precursor and the inspiration for warehouse-sized, immersive artworks.

With today's wide-throw, high-lumen digital projectors, it has become quite common to surround and bombard the viewer with an onslaught of visual and aural content. Contemporary artists as diverse as Refik Anadol, Charles Atlas, Petra Cortright, Olafur Eliasson, Ryoji Ikeda, William Kentridge, Barbara Kruger, Pipolotti Rist and Bill Viola have created installations using multiple projections (often coupled with sound) that envelope the space and the audience. Some artists surround the viewer with undulating and ever-changing shapes that are generated by code, while others use multiple projections to create narratives.

For example, Kentridge's “Journey to the Moon / 7 Fragments for Georges Méliès” (2003) is a nine-channel work that pays homage to the early French filmmaker’s silent sci-fi epic. Kentridge used his studio and the myriad props within his workspace to tell a story that re-imagines that journey to the moon. On the other hand, Ikeda uses mathematical algorithms to create environments filled with pulsating visuals derived from digitally rendered information coupled with sparse acoustic musical compositions.

It is therefore not surprising that museums and commercial enterprises have found ways to entice audiences with immersive, multi-projector installations that claim to be educational and visually stimulating at the same time. A search for “immersive art experiences” reveals environments worldwide with subjects ranging from art to science. These commercial productions aim to fuse art and technology and are often created by teams of programmers, sound engineers and special effects artists. Needless to say, the budgets are often well beyond that of an individual artist.

Recently opened, “Immersive Van Gogh Exhibit Los Angeles” (produced by Lighthouse Immersive and Impact Museums, among other companies) advertises that it brings the art of Vincent Van Gogh to life. Overlapping, wall-sized projections animating aspects of a handful of Van Gogh's best-known paintings — “The Potato Eaters” (1885), “Starry Night” (1889), “Sunflowers” (1888) and “The Bedroom” (1889) -- are cropped and recombined to pulsate, as well as flow horizontally across the various walls. Upon entry, we are led down a darkened hallway passing through an archway comprised of golden frames that leads to a gift shop and cafe. Once those needs are satiated, one can enter the "gallery" and find a spot to sit or stand and take in the thirty-five minute loop that guides us through a selection of Van Gogh's paintings and introducing them to a small fraction of his oeuvre. This visual experience is accompanied by a soundtrack composed by Luca Longobardi that suggests the different moods and stages in Van Gogh's life, ranging from frantic to brooding to elation.

In Los Angeles, the exhibition itself occupies two large spaces containing mirrored columns within the now shuttered Amoeba Records building (the store having decamped a couple of blocks east). In the smaller entry room, triangular and spiral-shaped mirrored sculptures are placed on the floor in the center of the room — functioning as both a backrest for seated visitors and as surfaces that refract the projections into divergent angles and shapes. In the larger second room, one can sit on the floor or on cushions within illuminated circles or ascend to a second floor balcony in order to look down at the installation.

Although viewers can enter the exhibition at any time during the 35-minute loop, it has a beginning and. It starts with images of candles, then moves to a sequence of hand-drawn animals and written phrases projected against a dark background to introduce Van Gogh and suggest the inner workings of his mind. This soon gives way to more colorful floor to ceiling projections of sunflowers, wheat fields, billowing clouds and windmills, as well as interior spaces that include Van Gogh's bedroom and the cafes he frequented. As these painted images fill the walls and the floor, we are transported into Van Gogh's world.

Sometimes the images become animated — the windmill blades spin or brushstrokes glide across the walls, reinforcing the fact that Van Gogh was a painter and not a digital artist. Sometimes the entire wall of sunflowers or the night sky morphs and twists, or the floor fills with crisscrossing brush marks that make plain we are viewing a pixelated surface and not an oil painting. At one point, a giant sun moves horizontally across the walls and later, the room goes dark before a new fragment illuminates the walls to show viewers a different aspect of Van Gogh's work.

What we learn about Van Gogh is little more than this: he painted sunflowers, the day and night sky, cafes as well as self-portraits. While the didactic information at the entry of the exhibition describes the general trajectory of his life and work, it does not reveal any complexities. One leaves the building stimulated by the experience, but not informed about the art.

Does turning Van Gogh's work into a spectacle do a disservice to his achievement or does this flamboyant display invite a deeper dive? Needless to say, “Immersive Van Gogh” is a mass-produced mythology of the tortured, solitary genius, and decidedly not educational. While it does not claim to be a work of art, it has many of the trappings but none of the conceptual sophistication of immersive installations conceived by the aforementioned artists. Knowing that there is also an immersive Claude Monet and Gustav Klimt experience, it becomes evident that these installations are formulaic, profit-making enterprises. While engaging and enticing, they do not transcend their technology. Time might be better spent visiting a museum looking at an actual painting and reveling in the artist's work as an intimate private experience, rather than as a bombastic public spectacle.