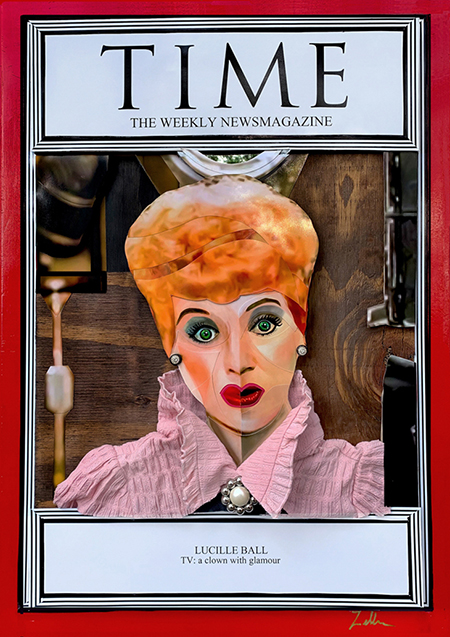 Carrie Zeller’s bold collage “Triple Threat” dominates one wall of this debut of a venue founded by art and music promoter Rick Conkey. Jorg Dubin, Tom Lamb and Zeller form the featured trio. The show documents their varied and creative responses to the travails of life during the Covid-19 pandemic. Dubin and Lamb exhibited extensively in this site, during its previous incarnation as BC Space Gallery.

Zeller began creating “Triple Threat” in 2020 in response to a photo of the late Congressman John Lewis (1940-2020) on a magazine cover. She posted the photo on her wall. “And when tragedy after tragedy continued to occur, I found myself hanging up all sorts of photos of crises happening globally,” she says. Inspired by these images, she began creating an assemblage featuring a slumped glass globe as its center, symbolizing the importance of nurturing our planet. The globe is surrounded by collaged images of events related to the Covid 19 pandemic, climate change and racial injustice. These images depict the Capitol, a blazing sky, a flag emblazoned with the words, “United We Rise,” and National Guard troops. There are photos of protagonists such as Lewis, Ruth Bade Ginsburg, Anthony Fauci, Kamala Harris and Greta Thunberg. Zeller explains, “This piece represents the beginning of the new world we live in today and of the steps we need to take together towards healing our planet.”

Zeller also contributes collaged photos of Lucille Ball, Frida Kahlo, and Jackie Kennedy Onassis. The Ball collage was her response to the 2020 Getty Museum creative challenge to artists, which read, “We challenge you to recreate a work of art with objects (and people) in your home.” Appropriating a 1952 “Time Magazine” cover with a photo of Ball, Zeller recreated Lucy’s studio. She put on a Ball wig and outfit, replicated her makeup, photographed herself, and then collaged her face alongside Lucy’s. The result is a portrait that at first glance could be of Ball, but quickly reveals itself to be a discombobulated version of her broadcast persona. It also evokes the work of Cindy Sherman, with the artist herself dressed and adorned to look like somebody else.

Zeller’s collage “Frida” consists of a painting of the iconic Mexican artist with a portrait of herself. The artist explains, “I feel like Frida told me to put a skull in my hair. I don’t use skulls in my work, but I realized she was facing her mortality and we were also facing mortality. She led a very isolated life after her accident, and I connected with that during the pandemic. It just felt right.” For her piece titled “Jackie O,” she collaged a photo of the former First Lady with an old photo of her mother, who idolized Jackie to such a degree that she emulated the way she dressed.

Zeller’s “Vitruvian Woman” is based on Leonardo da Vinci’s drawing of the “Vitruvian Man.” For this piece, she collaged together her photos of three different female models, all from different backgrounds and ethnicities, all posing in stances similar to those in “Vitruvian Man.” About this labor-intensive piece, she explains, “The symbolic thread is that with all of our differences, we are truly connected to each other, not only through our DNA but also through our shared humanity. The collaged woman symbolizes that we are all part of the greater global community with a shared belief in the common good for all."

Dubin’s paintings address issues of social injustice and political division. Several are of women, partially attired or nude, addressing the divisive abortion issue in our country. He also displays a 2020 painting, “The Orange Stand,” created during the Black Lives Matter protests, of a young African American boy confronting a menacing police officer. He describes the work as “a depiction of the widespread protesting throughout the country and police and federal government’s response.”

Lamb’s contributes colorful photos taken in Minneapolis, at the memorial created by Black Lives Matter protestors where George Floyd was murdered in May 2020. These photos are of murals, one depicting the BLM raised fist and another of Floyd, and drawings and graffiti supporting Floyd, along with potted plants that were brought to the site by supporters. Lamb also contributes a selection of his well-known aerial photos, several re-created into stunning rugs woven by local townspeople in Nepal, a testament to his support of indigenous labor in the third world.

The work in “2020” may be varied in media, execution, and intent, but the exhibition's strong common thread is the desire to help heal our planet through art.