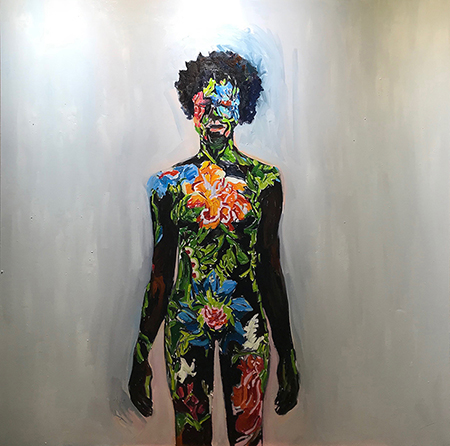 Dancing, mourning, celebrating, screaming, dying. They are all normal elements of human experience, and common themes reflected in art history. They’re also the raw material of Beverly McIver’s art practice, embodied by oil on canvas paintings that are both intensely personal and profoundly universal. Fifty works spanning more than two decades are featured in “Beverly McIver: Full Circle,” which is curated by Kim Boganey, director of Scottsdale Public Art. The survey lends significant insights into the artist’s explorations of portraiture, which centers around family, friends, and the artist herself. Meanwhile, it illuminates her use of portraiture to address race, gender, and the complexities of social and occupational identity.

McIver’s artworks make clear the essential connections between her personal and creative journey as a Black woman born in North Carolina in 1962, which formed the foundation of her evolving aesthetic. One sees her father donning a birthday party hat, her mother lying on her death bed, her sister Renee drinking Starbucks, plus the nude figure of a pregnant woman and a portrait of the artist with a friend and creative collaborator. But one also sees self-portraits in which the artist wears blackface or whiteface, and a number of paintings depicting the artist as a clown that speak to her early exploration of clowning as a means of creative self-expression.

With these expressive paintings, McIver powerfully translates her own emotional life while also prompting us to consider our own assumptions, identity, relationships, and interior life. The layers of complexity in McIver’s interior and exterior worlds are echoed in her vibrant, textured handling of the human form, which she imbues with primary colors surrounded by the subtle shadings that frame them.

In “Depression Series 1-5,” McIver zooms in on her own face, her head sometimes set on a surface as if it’s a rock too heavy to carry or hold. The artist often works in series, which are well represented here. One particularly striking self-portrait from her “Doll” series, a 2016 painting titled “Loving Grace,” depicts the artist’s face emanating joy and contentment as she leans against a cloth doll with Black skin.

McIver’s aesthetic critiques the racism and sexism that’s pervaded her own experience and which permeates the larger culture. Several of her works address the Mammy caricature. With “Loving in Black and White #3” (1998), the artist, wearing blackface, kisses a white man. In “Loving in Black and White #5,” the artist lays her head on his lap as he sits beneath a small shelf holding a slice of watermelon, a symbolic object that recurs in her body of work. In more recent paintings, she’s used ropes wrapped in chaotic movement around the face, which carry historical references to lynching while also capturing the contemporary zeitgeist.

At times, McIver’s work channels historic events. In a series of “Dear God” paintings that feature self-portraiture and text written by the artist (2007-2010), she reacts to both President Barack Obama’s election and Senator Ted Kennedy’s death. But the series also includes pieces about receiving a letter from a prisoner and a Las Vegas vacation, suggesting that the artist assigns equal power to the stuff of personal and global histories. Recent works including “Defiant” and “Enough” (both 2020) convey emotions tied to the Black Lives Matter movement and the Covid-19 pandemic.

In addition to McIver’s own paintings, the exhibition includes four silver gelatin prints by Ernie Button featuring people whose stories McIver has transported with her paintbrush, as well as portraits of subjects such as choreographer Bill T. Jones. A companion exhibition titled “In Good Company” includes works by several of McIver’s mentors and former students, amplifying the focus on the artist’s personal nexus. Those mentors include Elizabeth Lentz, Richard Mayhew, and Faith Ringgold. The students include Claudio Dicochea, Michael Dixon, Carrie Hott, Mary Porterfield, and others.

“Full Circle” embraces the circle as a metaphor for the artist’s authentic self, amplifying the myriad arcs of personal and collective histories that continue to grow and evolve in McIver’s personal journey and revelatory body of work.