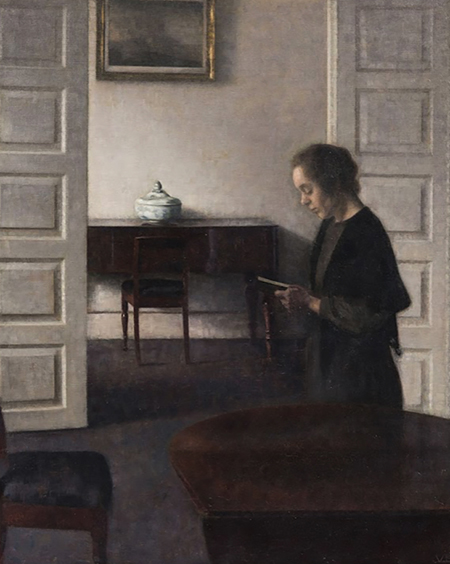 For “From Dawn to Dusk,” curators at Sweden’s Nationalmuseum in Stockholm concentrate on paintings, watercolors and drawings by Danish, Norwegian and Swedish artists of the late 19th- and early 20th-centuries. The show includes 56 superb examples of landscapes and portraits that convey deep emotion expressed under tight control, all of which would break out as Expressionism in the early 20th century, before and after the horrors of World War I.

Until then, Norway was still a colony of Sweden (as Finland had been) but subsequently chose a constitutional monarch from the Danish royal family. Despite such political and geographical ties, Denmark and Norway developed distinctive regional and national schools of art, establishing art academies which usually sent their most talented artists on to Paris, Munich or Berlin, where they caught the bugs of Impressionism, Post-Impressionism and, later, Symbolism. The first two styles were reinforced by a strong underlying draftsmanship, with subject matter trending towards engaged social reform. As “Demolishing the Old Orphanage, Stockholm” (1886) by Swedish artist Anshelm Schultzberg demonstrates, “an old cramped and unhealthy environment makes way for a modern spacious and salubrious one,” as the wall text notes.

This is an elegant, moody exhibition, thanks in part to the deep maroon walls exposing alternately verdant and sunny landscapes, penetrating portraits, and dark interiors. Names well known to those even marginally familiar with Scandinavian art such as Anders Zorn (Sweden), Vilhelm Hammershøi, and Laurits Andersen Ring (Denmark) are joined by excellent unknowns from Norway and Sweden, mostly women such as Hanna Hirsch-Pauli, Hildegard Thorell, Elisabeth Keyser, and Emma Toll (Sweden) as well as Sofie Werenskiold and Harriet Backer (Norway). Then advanced social thinking supported women in professional roles (they all studied abroad) not to mention early suffrage and divorce legislation. Free to travel alone — and cast off their corsets — Nordic female artists not surprisingly, explored family relationships, but also rural poverty, as in Backer’s “A Country Cobbler” (1887) and religion, as in Keyser’s “A Confirmand in Normandy” (1889).

Returning to the north, these artists drilled deep into private as well as public lives. Hammershøi executed the painterly equivalent of Ingmar Bergman’s moody black-and-white films in works such as “Interior with a Reading Lady” (ca. 1900). August Strindberg is more familiar to us as a playwright, but “The Town” (1903) is perhaps the most radical expression of urban anxiety of its time, something his Norwegian colleague Henrik Ibsen had earlier captured in the play, “An Enemy of the People” (1882).

Portraits and landscapes that are less depressing are numerous enough, contrary to widely held stereotypes about Northern European art of the period (1870-1910). Zorn’s “Coquelin Cadet, Actor” (1889) and “Portrait of a Boy” (1881) by Richard Bergh are glowing and happy. They provide contrast with Keyser’s “Self-Portrait” (1880) and Hirsch-Pauli’s terrified “A Bavarian Peasant Girl” (1885-1887), psychological revelations that expose tensions young women of that era held tightly behind their visages. Such hesitancy is also seen in Carl Wilhelmson’s “The Artist’s Sister” (1899) and Hugo Salmson’s “Portrait of a Young Girl” (1880).

Among the many landscapes, we are able to chronicle the seasons, the sites, geography and topography of the three nations as we stroll through the galleries. While winter is long, as expressed in “Winter Scene from the Stockholm Waterfront” (1899) by Alfred Bergstrӧm, and spring is short, as in Carl F. Aagaard’s “Skittle-Alley … Spring Morning” (1882), other vistas by Frits Thaulow, Ivar Nyberg, Carl Larsson, and Axel Lindman explode with sunlight and nature’s bounty. Sunsets, twilight scenes, and morning rays are captured in all their brevity.

Nature in Scandinavia includes fauna as well as flora, and several paintings of animals defy sentimentality, substituting it with harsh, but endearing, reality. Bruno Liljefors’ “Eider Ducks” (1894) floats a new family on lake water, a churning pond of brown, green and blue. More cogently Nordic perhaps in its hint of danger, Liljefors’ “A Fox Family” (1886) charmingly nestles a new den of mother and pups. They are revealed to be sharing dinner, a white-feathered duck they are cheerfully tearing apart, gnawing on, and delighting in their bloody family dining custom. Families of all sorts are fodder among the Nordic masters for expressions ranging from outrage to entertaining examination. This awareness strongly complements, even completes, the portraits and landscapes that comprise this informative survey.