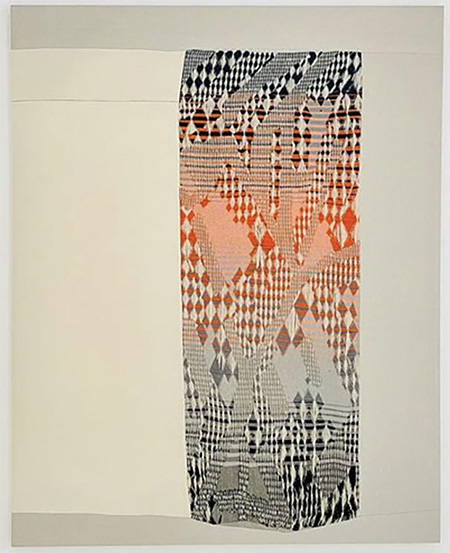 Jovencio de la Paz, a fiber artist based in Eugene, Oregon, is interested in the intersection between the hand and the machine and between traditional craft and digital technologies. De la Paz's (they/them) evocative works explore the anomalies that occur when the hand interferes with the Jacquard loom, specifically the digital TC2 (Thread Controller 2). Developed in the 19th century, the Jacquard loom was originally controlled by punch cards that created complex patterns. Today it runs via computer software.

De la Paz plays with the ways the weave can be mapped to pixels. Though made of fabric, the compositions have a digital aura. The artist adds irregularities reminiscent of computer glitches. In this sense, they share a kinship with Channing Hansen, who spins fleece into yarn and then knits abstract forms based on complex computer algorithms. Both artists combine the handmade with digital technology.

Many of de la Paz's works are based on software written by the mathematician and Symbiogenesis pioneer Nils Aall Baricelli in the 1950s, and the result of a collaboration between the artist and the programmer Michael Mack. As de la Paz states, "I have adapted Baricelli's original software to develop a tool to grow and evolve weave structures for the TC2 loom, capturing the growth and decay as woven cloth instead of graphical visualization. The resulting textiles are self-generating genealogies written line by line, pixel by pixel, by each pass of the weaving shuttle."

Rather than display the tapestries on a table as they have in the past, or hang them directly on the wall, de la Paz surrounds them with pieces of raw linen that have been sewn to the edges of the design, akin to a patchwork quilt. The weavings are then stretched like paintings, extending their presence into three-dimensional space. Though made from soft thread, the works in the “Bent Pyramids” and “Warped Grids” series are complex geometric abstractions that reference Op Art. Irregular vertical stripes created by weaving light tan and blue threads ebb and flow across “Warped Grid (1.2)” to collect at the center of the composition. The top of the weaving begins as a tight grid that evenly combines the two colors, but about a third of the way down, both the horizontal and vertical threads become looser, resulting in triangular shapes that form diamond patterns recessed below the surface. Similarly, “Warped Grid (1.0)” juxtaposes white and yellow threads to create hourglass and diamond shapes in various sizes. Some of the white vertical threads dissolve into loose wavy lines, while the yellow horizontal threads remain taut.

The “Bent Pyramid” works take their point of departure from the Bent Pyramid of Dahshur, an ancient Egyptian pyramid that appears "bent" because it was initially constructed at too steep an angle and subsequently adjusted to prevent its collapse. In this series, de la Paz's weavings play with the angles and relationships between triangular shapes as they emerge from striped backgrounds. “10 Failed Circles” is a suite of ten smaller works featuring woven concentric circles in hues of gray, brown, red, yellow, and blue that fade to beige in the center. By adapting the program designed to produce perfect concentric circles, de la Paz directs the weave and the weft of the shapes to mutate so the circles become distorted along the horizontal or vertical axis.

What is fascinating about de la Paz’s aesthetic is the way it borrows from craft, art history, mathematics, biology, and digital technologies to create beautiful works that challenge expectations. Each woven section is created by making accidents happen on machines otherwise designed to produce perfect forms. By understanding and tinkering with the ways traditional craft and computer programming can work together, de la Paz has pushed the boundaries of weaving and established a foundation for an ever-evolving body of work. Simultaneously flat and dimensional, curvy and straight, saggy and taut, loose and precise, monochrome yet subtly colorful, these pieces speak to the multiplicity within us all.