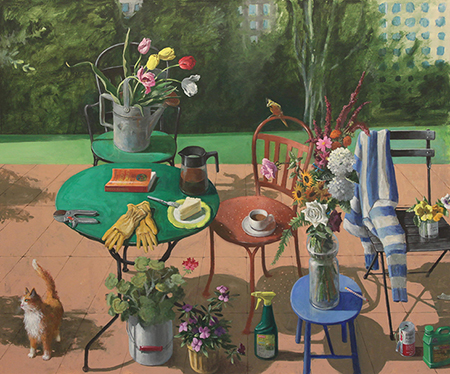 The distinct painting categories of still life and landscape meet and greet in the oddly satisfying work of Bay Area painter Paul Wonner (1920-2008) in a show entitled “Landscape of Objects, 1966-2001.” Born in Arizona, Wonner was educated at the California College of Arts and Crafts in Oakland and at UC Berkeley, but began his career as an Abstract Expressionist in New York immediately after World War II then returned to the Bay Area in 1950 for graduate school. Influenced by mentors and peers such as Elmer Bischoff, Richard Diebenkorn, and David Park, he gave up pure abstraction in favor of Bay Area Figuration’s painterly variant of realism, with energetic brushwork evoking simplified figures and atmospheric backgrounds.

Comprising this show are seven large acrylics on canvas and a dozen medium-sized acrylics on paper. “Tulip” (1966/67) is a transitional work from a period in which Wonner isolated small objects — flowers, pitchers, fruit, flowers — on large empty planes in darkened spaces. The melancholy lyricism of light and shadow recalls the enigmatic figures of his colleague Nathan Oliveira. The tender droop of the single tulip in its glass of water, illuminated from an unseen window, suggests the traditional juxtaposition in seventeenth-century Dutch flower paintings of beauty and intimations of mortality.

Representative works from the 1970s onward depict sunny, artifact-strewn gardens redolent of the good life. “Garden Table with Flowers and French Books” (1996) presents a flower-bedecked table, laden with coffee and cake, linen napkins and porcelain vases, and tourist reference books that suggest cultural points of origin. Sure enough, beyond a hedge we glimpse the Paris skyline. “Luncheon in the Studio” (1994) regales the eye with festive sprays of flowers adorning yet another tasty repast (cake, French bread, cheese, fruit); on the brown wall beyond the table are hung a still life by the artist of flowers and books, and a print of Manet’s — wait for it — “Luncheon in the Studio” (1868). “Study for Still Life with Pot of Ranunculus on a Carton” (1981) pairs another art-historical reference, a flower painting by French Baroque painted Jacques Linard (1597-1645), reproduced on a postcard, with Wonner’s pink and orange bouquet set like a statuette atop a cardboard box, its mailing label brazenly displaying the artist’s address in San Francisco. “Garden Terrace” (1997) depicts another Parisian-style garden, judging by the wrought-iron outdoor furniture, including a table, three chairs and a stool covered with books, flowers, tools, plant ties, and a bottle of Ortho Weed-B-Gone. A rare cat in the lower left stalks a bird perched on a chair back behind it.

Wonner’s cast of inanimate characters — the Heineken beer bottle, the paint tubes, the gardening tools, the pencils, the books, the slices of chocolate cake, the fruit and cheese, and the ubiquitous bouquets — recur in varying formations and locations. His love of these objects is resonant, although he never obsesses over them hyper-realistically or with Dutch-Master detail. The drama of his compositions lies in the light that falls on them, casting sharp shadows; and the strange perspective in which tabletops are seen at abnormally steep angles, the better to display the items they bear, as in Flemish religious altarpieces or late Cézanne. It also suggests the Metaphysical paintings of Giorgio di Chirico, but without the angst and melancholy. The mystery of the everyday is evoked by the appearance of the brightly colored objects within the circumambient space and light. Wonner’s winning object-scapes are inscrutable Annunciations, objects of contemplation fit for mystics without faith.