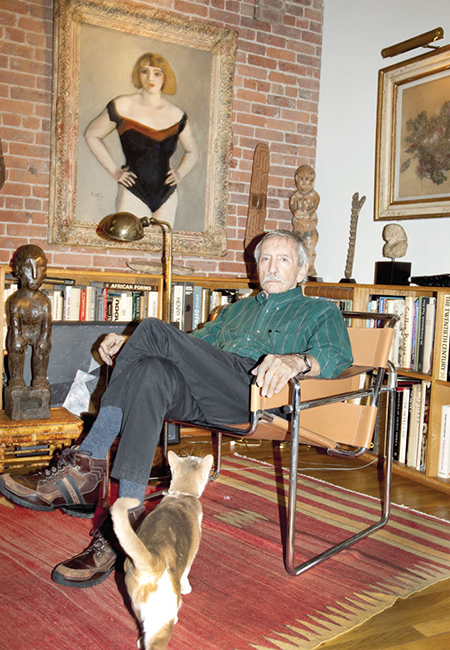 The late playwright Edward Albee is remembered here for his very real struggle for critical acceptance and the good work of his foundation.

When the playwright Edward Albee (1928-2016) died this year at 88, there were numerous eulogies and reminiscences in print and online media, all of which reflected the ambiguity of responses and reactions to the Pulitzer Prize-winning writer’s 30 or so plays. Having grown up in Seattle, it struck me that Albee’s creative presence in the city from 1966 on was periodic, if not sporadic, or continuous, but deeply appreciated.

Albee’s place in American theatre history was more problematic than his consistent support of the visual arts. He remarked in one interview that response to his plays had been “fifty-fifty” and, for a major American playwright, he received a larger number of negative reviews than any other, except Tennessee Williams. A few recent articles, including one in the “Forward” in New York, drew attention to the raft of New York critics who hated Albee from the beginning, including Harold Clurman, Martin Gottfried, Stanley Kauffmann, Walter Kerr and Howard Taubman. Given Albee’s relentless critiques of heterosexual unions and American middle-class life, most of the contemporary responses now read as unveiled homophobic attacks and, as such, are shameful.

Albee’s influences are less opaque. His own admitted influences were “Thornton Wilder [who encouraged him when they met in 1950], Chekhov, Susan Sontag and Artaud.” Among the playwrights he hated were ”Clifford Odets, Maxwell Anderson, Robert Sherwood and Neil Simon,” whom he called “a pornographer.”

Roger Downey, a dissenting Albee critic at “Seattle Weekly” between 1976 and 1995, didn’t like “Balance” at all. “The only later play that is more than perfumed hot air is ‘Three Tall Women.’ The San Francisco production of 'Tiny Alice' [at American Conservatory Theatre] was the best staging I’ve ever seen of an Albee play — but Albee hated it. [Director William] Ball made it a closet play, but then, Albee’s whole career was based on the closet.”

Downey continued, “People sit around talking windily about their angst. ‘Virginia Woolf’ is pretty thin, but the language, line by line ... is pretty damn good ... He was the most humorless of ‘major playwrights.’ They’re so windy, verbose and chi-chi. In the long run, he’s an outlier, like Gore Vidal, coming from remarkably patrician, untroubled financial backgrounds. Some consider Albee’s reputation wildly inflated and not expected to live because the East Coast cultural establishment will no longer be in charge.”

Barbara Quinn, a Seattle sculptor who was twice an Albee Foundation fellow (1977 and 1987), also worked as a caretaker for the playwright at his Montauk home on Long Island for two years. “I remember the Labor Day parties. He loved artists! Lee Krasner was there. Lauren Bacall, Diana Ross, Maggie Smith and Claude Picasso would appear, even his mother came once — in a chauffeured car. She would sit by the pool.”

“Edward was a very shy man, but few people knew this. And he could be quite cutting. He was an argumentative man. [Albee’s partner] Jonathan [Thomas, 1946-2007], once said to me, ‘Are you sure you want to argue with Edward? You know he always wins.’ He loved visiting my studio and bought two pieces for his collection [which also contained works by Vuillard, Kandinsky, Arp and Milton Avery, his favorite]. We would go to galleries together and Edward would go into a gallery and re-hang the shows! And of course, Louise Nevelson [the subject of his 2008 play “Occupant”] was in the collection, as well as Medardo Rosso, whose work he loved.” Another Seattle artist, Galen Garwood, is also in the collection. Albee later wrote catalogues or curated exhibitions for other artists he admired such as Heide Fasnacht and Ellen Phelan, as well as a show of Foundation artists at Haim Bouckaert Gallery in 1982.

With the success of “Virginia Woolf,” Albee founded the Edward F. Albee Foundation in 1967 and it continues today with month-long residencies. No honorarium, food or other expenses are included other than free lodging, studio and a monthly dinner with Albee. “He didn’t talk much at the dinners, just listened,” Quinn added. “In his house, he’d work upstairs off a spiral staircase and his desk faced the ocean.”

Quinn’s estimation of Albee as a playwright is higher than Downey’s: “He was a very brilliant playwright dedicated to words like no one I’d ever heard before; he would correct me constantly.” Jean Burch, a Seattle actress and co-founder of A Contemporary Theatre, ranked him “not above [Arthur] Miller or Williams, a little bit below Williams, but he was a great writer.” I concur and believe the best of his plays will continue to be performed in the U.S. as well as throughout Europe, where he is still quite popular. Not only about “upper-class suburban white people,” they transcend their class limits and speak to family conflicts, the persistence of loss in life, and the difficulty of communications in all relationships.