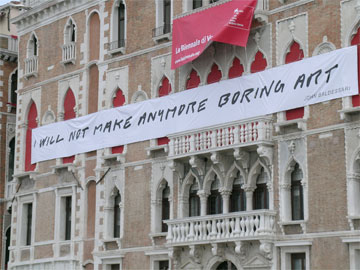 The 53rd International Art Exhibition, titled Making Worlds // Fare Mondi // Bantin Duniyan // Weltenmachen // Construire des Mondes // Fazer Mundos…, directed by Daniel Birnbaum,  opened to the public on 7th June 2009 in the Giardini and the Arsenale exhibition venues, as well as in various other locations around the city. The vernissage took place from 4th to 6th June. The opening and awards ceremony was held on Saturday 6th June, attended by the President of the Italian Republic, Giorgio Napolitano.

Biennale director Daniel Birnbaum emphasised the international scope of the exhibition in the selection of both Ono and Baldessari for the prestigious prize. “The Golden Lions for Lifetime Achievement are celebrating two artists whose avant-garde work has opened new possibilities of poetic, conceptual and social expression for artists around the world, who work through all types of language,” said Birnbaum.