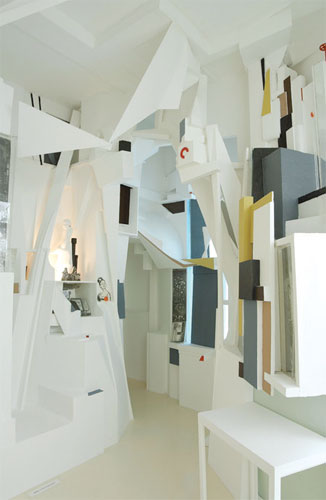 This fall, the Berkeley Art Museum hosts the exhibition "Kurt Schwitters: Color And Collage" (through November 27, 2011). Schwitters was the grand master of collage. His last survey exhibition in the US was in 1985 and the present show, with almost 100 works, mostly collages, a few sculptures, and a major installation of the reconstructed Merzbau, was organized by the Menil Collection in Houston. The Menil's director Josef Helfenstein worked with co-curator Isabel Schulz of the Sprengel Museum in Hannover, who was also the co-editor of the Schwitters catalogue raisonne, which was completed in 2006.

Schwitters grew up in Germany when Expressionism was the leading art movement, and was originally trained as a painter. But painting, and art in general, made no sense when the world went up in flames in the Great War, and with it German Kultur. The Dadaists tried to reveal the sham of it all, and Schwitters was the Dada of Hannover. Rejecting the traditional medium of oil paint, he collected detritus, rubble, garbage, newspaper, colored paper, wrappings, old tickets, fabric and pasted them down to make pictures, ridiculing the antiquated values with the intent to shock the bourgeoisie at a time when shocking still seemed possible. He coined the word "Merz" (from "Commerce") for the collages--some people propounded that the neologism was derived from the French "merde" (shit), a definition to which he did not object. He used the same term for his nonsense rhymes which he would loudly declaim in rhythmic sounds: "Ii / Uu / Aa / P'gikk / P'gikk / Bedeckiee"--a Merz language which was meant to be abstract and quite without meaning.

Braque and Picasso had made collages earlier, but Schwitters brought collage--visual and verbal--into a language of its own, which later became paradigmatic for American artists such as Joseph Cornell and Robert Rauschenberg. Schwitters' aesthetic sense prevailed. Working on the floor with water and paste, as well as watercolor and gouache, he fixed the papers to canvas or cardstock, creating flatbed pictures of astonishing color values. As you go through the Berkeley exhibition, you will see works in which certain colors--blue, yellow, rose, black--are dominant. Also, influenced by the art of his time, his earlier collages are more expressionist in appearance while the later ones, under the impact of Constructivism coming from Russia and the Bauhaus, are more structured and well ordered in design.

Beginning in the early 1920s, Schwitters worked on his Merzbau (Merz column), a structure, which went through the roof of his house, and which consisted of grottoes containing assortments of diverse objects. There was the "Grotto of Love" and a key would open the "Cathedral of Erotic Misery." Artists, including Hannah Hoch, Laszlo Moholy-Nagy, and the Russians Naum Gabo and El Lissitzky, went to Hannover to see the installation and at times to contribute to it. When the Nazis came to power in 1933, Schwitters was to be arrested as a "Degenerate Artist." He took flight to Norway, where he began constructing a new Merzbau, but soon Norway was invaded, and Schwitters found haven in the English countryside, where he continued making collages and started once again to work on his great structure. However, he died before completing it. The original Hannover Merzbau was destroyed by bombs during World War II. Using detailed archival photographs, artisans in the Sprengel Museum have been able to reconstruct a replica, which is presented for the first time in the US in this exhibition: a rare chance to experience first-hand the works of this influential, singular 20th century artist.