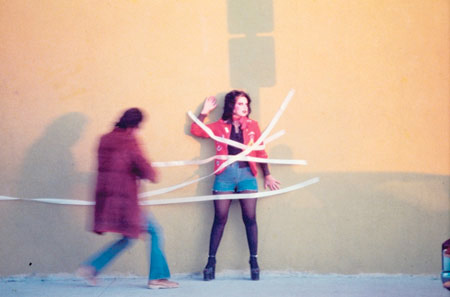 One of the best ideas to come out of Pacific Standard Time is a retrospective of the Chicano performance and conceptual art group Asco, a group whose inventive irreverence helped enliven and enrich the cultural landscape of Los Angeles. Young, hip, and attuned, they were astutely political during a time of seismic cultural and political shift in Southern California. The Los Angeles County Museum of Art (LACMA) took the idea and ran with it, and the result "Asco: Elite of the Obscure, A Retrospective, 1972--1987" (through December 4) is Asco's first retrospective and a wonderful tribute. It's not a little ironic that members of Asco once saw LACMA as a fortress, a fortress of traditional art and culture barred to minority participation, and now they find themselves inside and celebrated for being outsiders.

"Some artists don't get to see their work in a museum," Patssi Valdez, one of the founding members of Asco, said to me recently. "I was thinking about Frida Kahlo. They didn't have her work in a museum 'til she was long gone... It took a lot of time for us to get in the front door, but I'm glad it happened."

Valdez and the other three founding members--Harry Gamboa Jr., Gronk, and Willie Herron--met through Garfield High School in East Los Angeles. All had art aspirations, and Gronk, Herron, and Valdez later studied art at East Los Angeles College (as did Diane Gamboa, sister of Harry, who sometimes participated in Asco projects), while Harry Gamboa attended Cal State Los Angeles. (Valdez later attended Otis College of Art and Design.)
They came of age in a politically charged America. It was the time of the Vietnam War, and Chicanos, like African Americans, had been drafted in disproportionate numbers. Over 170,000 Hispanic Americans served in the war. The National Chicano Moratorium Committee called for opposition to the war, and 30,000 attended the fateful August 1970 march in East LA that met with police violence. It was also the time of growing Chicano awareness--the United Farm Workers, led by Cesar Chavez and Dolores Huerta, had some of its most visible campaigns for farm workers' rights in the late 1960s and early 1970s.

Asco members met frequently to toss around ideas, produce drawings and paintings, and make costumes and props. "It was very intense," Valdez recalls. "The guys and I met almost daily. When we were brainstorming or working on a show we'd worked through the night, often in my garage." They created public performances, public art, and publications, wanting to, as Valdez says, "speak out about what was happening in our neighborhoods."

Their first public performance was Stations of the Cross (1971), where they dressed up like Day-of-the-Dead figures, with Herron playing Christ/Death carrying a giant cross made of cardboard. Gronk was Pontius Pilate/Popcorn and Gamboa was Zombie/Altar Boy--it was their flip conflation of the religious and the profane. With painted faces and in costume, they paraded down Whittier Boulevard and ended up at the Marine Corps recruitment center on Goodrich Boulevard. After a brief silence, they set the cross in front of the entry, and took off. They happened to be photographed by Seymour Rosen, a photographer and local organizer, whereas in the future Gamboa would often be doing the recording with his still camera. Later, they also had access to film and video.

Thus Asco's major performance pieces were documented, and in this exhibition curated by LACMA's Rita Gonzales and Williams College's C. Ondine Chavoya, we can imagine them through photographs and videos. There's even a sequence of the four getting dressed up and putting on make-up--it shows how much fun they had, while expressing their asco with the way things were.

"Asco" means disgust or nausea in Spanish. There are slightly different explanations for how the group got its name. Gronk has said, "A lot of our friends were coming back in body bags and were dying... And in a sense that gave us nausea..." Gamboa has said, "The name Asco... came from people's reactions to us personally... [and] to the quality of the work which dealt with violence and themes of depression."

While the group had a serious agenda, their work was often playful, and a prankster's aesthetic drove them. For example, they played on variations of murals in response to painted murals prolific in East LA. In Instant Mural, they drove to a busy street in their neighborhood. Valdez, in a red jacket and hot pants and platform shoes, plastered herself against a wall and held a pose with one hand up and one hand down, while Gronk taped her down. "Harry Gamboa documented it," Valdez recalls, "he happened to have the camera." A still of this performance has become a key image for PST publicity. Humberto Sandoval, another frequent collaborator, was taped down next to Valdez. "It was a hit and run piece," Valdez says. "We had the car ready to make our getaway."

One ongoing series was No Movies, for which they posed for stills from movies that were never made. These had titles such as Fountain of Aloof (1974), The Gores (1974), and A La Mode (1976). Valdez vamped for these stills like a movie diva, the men dressed up in suits and other costumes. They even held an awards ceremony for these nonexistent films, the Asco Awards, also known as the Aztlan or No Movie Awards. On display is the golden cobra award they gave out, apparently over and over again, at their ceremonies, which became yet more material for No Movies. The No Movies were a spoof and a critique of Hollywood, another exclusionary part of the Establishment, but they were also aspirational. Gronk said, in a 1972 interview, "I'd like to do movies rather than just limit myself to drawing and paintings. I find to expand propaganda-wise, I have to get into cinema." Artist Amalia Mesa-Bains wrote in a 1999 exhibition catalog, "Asco's performance trajectory was established by the age and generation of the members, and it was set out against tinsel town, B-movies, race riots, rampant discrimination, play, and fantasy."

The exhibition itself could have done more to convey the exuberance and excitement of Asco and its heyday, a problem of the rather staid exhibition design. Presentation of the material could have been more experimental and outside the box, like the riotous presentation of the "Art in the Streets" show at MOCA Geffen earlier this year. While the LACMA show uses plenty of video--there are screens and/or projections in every room--there is relatively little three-dimensional work, whereas Asco was very much about occupying space, sometimes space they shouldn't be in. The closest to an environmental experience is the room where part of Agnes Varda's film Murs Murs (1981) is being projected. The French avant-garde filmmaker came to Los Angeles and ended up making a loose documentary about mural culture. Asco created a colorful installation in front of Self Help Graphics and put on a performance where Valdez in high drag bursts out of a giant paper heart and lots of stuff gets tossed into a burning pyre, a bit of horror film camp. Gronk has recreated some of the paper dolls and props of the performance which hang from the walls, and there is a work on the opposite wall that Valdez has made where the spray paint moves from wall to canvas, but still the room seemed big and empty.

Those who have time should try to watch the various documentaries in the last room, as there are great interviews with Asco members which illuminate some of the work seen in previous rooms. Finally, it would have been helpful to see the current work of the four main artists--all four are still alive and producing individual work, some of which was seen in "Round Trip" at the Vincent Price Art Museum earlier this year. That would have provided a more satisfactory ending: to see that these daring young artists went on to become mature artists. Those kids weren't just fooling around, they were making work of their time--and training for the future.
This article was written for and published in art ltd. magazine