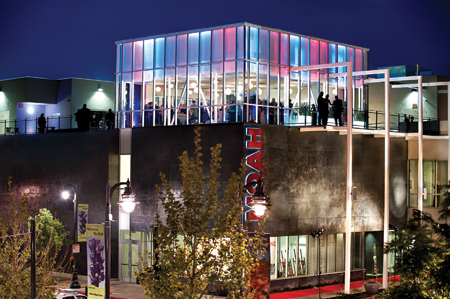 One doesn't necessarily associate the high desert north of Los Angeles with contemporary art. But that may change; this spring, the city of Lancaster completed a new, twenty thousand square foot museum facility. After a two-year hiatus, the Lancaster Museum of Art and History (MOAH) re-opened to the public on May 5, following a black-tie gala event. At the celebratory ribbon-cutting ceremony, Lancaster Vice-Mayor Ron Smith, who had championed the importance of the arts in the city's revitalization, hailed the Museum's new facility on Lancaster Boulevard, at the main intersection of the downtown pedestrian mall, as the heart of the city.

Andi Campognone, who joined MOAH in November 2011 as the Museum's curator, was instrumental in moving the project to completion. Campognone, formerly a curator at the Riverside Art Museum from 2005-2007, brings a focus on contemporary art and a wealth of experience as an independent curator. Since 2007, Campognone has operated two contemporary art galleries, most recently, Andi Campognone Projects, in the Pomona Arts Colony, east of LA.

The City of Lancaster may seem an improbable location for a new regional museum with a state-of-the-art facility. Yet, the city that is sometimes thought of as little more than a "pit stop on the way to Mammoth," according to Lancaster Museum and Public Art Foundation board member Steve Eglash, has made a bid to provide challenging contemporary art programming for the Antelope Valley with the hope of drawing audiences from Los Angeles. Starting around 2002, the city of Lancaster embarked on an ambitious revitalization, with the aim of creating a pedestrian friendly, economically and culturally diverse downtown. Ten years ago, the boulevard where the museum facility is located was a six lane highway, with cars flying by at 60 mph. Eglash said the city wanted to create "a place with a downtown feel, like a neighborhood," rather than an island in a sea of cars.

The new Museum is the centerpiece of that transformation. The sleek modern building, designed by the Pasadena firm PSL Architects, is a clever play on the universal white-cube exhibition space. The $5.5 million structure is finished in glass, steel, and black plaster-composite panels which have the variegated texture of chiseled granite. Resembling a series of interlocking polygons, the Museum is anchored by a tall luminous glass rectangle and sheathed about its middle with the composite black panels, like an exoskeleton, which correlate to the interior exhibition spaces. A series of naturally lit, crisscrossing corridors connect the 2,500 square foot main gallery with the Museum's other galleries.

Founded in 1986 as the Lancaster Museum and Art Gallery by board member Ralph Bozigian, MOAH has focused on exhibiting local Antelope Valley artists and has pursued a two-pronged collections practice. Acquisitions of art objects centered on early California landscape painting and figurative painting, while the Museum also collected objects of historical significance, including Native American artifacts, geological specimens and other artifacts related to the history of the Antelope Valley. The Museum's two locations reflected its twofold mission. During its first 24 years, the Museum's modest exhibition space for visual art was located on Sierra Boulevard, not far from the new facility. Renovated in 1988, the second location, the historically significant Western Hotel Museum, provides exhibition space for historical artifacts from the permanent collection. In the last six months, under Campognone's guidance, MOAH has re-examined its exhibitions and acquisitions practices, rewriting its mission to focus on post-war American art with an emphasis on California art. The Museum will retain its collection of historical artifacts from the Antelope Valley and continue to serve the local Antelope Valley arts community by offering exhibitions of local artists.

The inaugural exhibit in the main gallery, "Smooth Operations: Substance and Surface in Southern California Art," reflects MOAH's new focus on contemporary art. Jointly curated by Campognone and writer/curator Peter Frank, "Smooth Operations" is a melange of synthetic abstraction that came to the fore in Los Angeles in the 1960s, featuring works by Larry Bell, Judy Chicago, Fred Eversley, Lloyd Hamrol, Roland Reiss, DeWain Valentine, and others who worked with a cornucopia of emerging plastics, polyester, resins and other non-traditional materials derived from industrial technologies. The show's focus demonstrates Campognone's interest in bridging cutting-edge artistic sensibilities with the experience of the local Antelope Valley community. "Smooth Operations" contextualizes the artistic developments of the 1960s within the Antelope Valley's long history with the aerospace industry.

Augmenting "Smooth Operations" is an exhibit of MOAH's Eglash Collection, a group of contemporary art works gifted to the museum by Eglash and his wife, artist Gisela Colon. The collection includes works by artists Lisa Bartleson, Eric Johnson, and Eric Zammitt, who have built on the previous generation's use of synthetics. Plans for future exhibitions underscore the Museum's commitment to Southern California painting. Over the next year, the Museum is planning an exhibition of perceptual works which will include a series of nine cloud paintings by hard-edge painter Karl Benjamin, a solo show of Gary Lang paintings, and a survey focused on the resurgence of figurative work in contemporary art within conceptual, representational, and literal modalities.

While Campognone acknowledges that the long-term goal is for MOAH to become a destination, the first priority is "to satisfy a cultural void for the Antelope Valley." The Museum's mix of programming accommodates the community's immediate priorities and MOAH's long-term aspirations, and, for now, it seems to be a success. "The support for the arts community is unbelievable," Campognone remarks. "The residents of the Antelope Valley are thrilled to be involved: people are volunteering, and the art community has just come out of the woodwork. It's the community's museum."