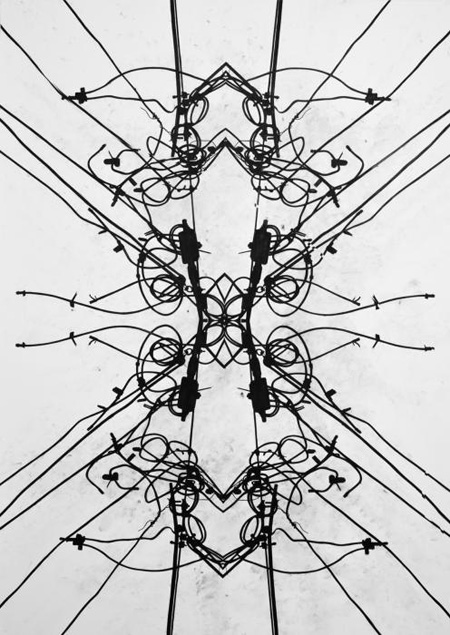 There is a pole-mounted electrical transformer not ten feet from my office window. I stare at it frequently when I am daydreaming or when a bird or squirrel comes by to balance on its thick black wires. Since viewing Randy Twaddle’s new work, I have a new perspective on that transformer. I see a circular grey bottom and below that, a tangle of wires shooting off in half a dozen directions. The backdrop changes constantly, depending on the weather. Today it is a mottled grey and all in all, it could be one of Twaddle's lyrical drawings.

Twaddle has been making large drawings of transformers, wires and poles for a while, even using them as the basis for patterned rugs, textiles, and wall coverings. He finds this subject matter fascinating because, in his words, “they have become invisible through their ubiquity.”

This show, however, includes only two large-scale charcoal drawings on paper. “Lord’s Acre” and “Forager’s Compass” are a departure from many previous drawings in that they are symmetrical. If one were to draw an imaginary line down the center, the thick black wires and connecters on either side mirror one another like an elegant Rorschach test. The symmetry makes these drawings even more lyrical.

The drawings have another essential element — charcoal smudges that occur as Twaddle works. These gray smudges soften the drawings and emphasize the fact that they are handmade. The stray marks also create a layer of depth by suggesting cloud patterns in the sky beyond the electrical wires.

Another wall is hung with a double row of 14 small collages. Made from fragments of photographs (source material for Twaddle’s drawings) and a few pieces of coffee-stained paper, they bring a bit of color into the show. "Scribble-Scrabble” is composed of nine portions of photographs cut into rectangular shapes. The various blues and grays of the sky and clouds create a changing background for the always present electrical wires.

“Budding” is constructed from 13 photographs, a couple of which are cut into triangular shapes. On the right side of the collage, Twaddle has arranged images of three similarly shaped loops of wire that seem to recede due to their diminishing size. Opposite, Twaddle joins together four photos to create a continuous tangled, meandering line. Lines in these collages often connect, leading one’s eye in and around the image. In the center of “Budding” are two photo fragments with silhouettes of leaf-less trees and two more with no wires or trees at all, creating a tranquil center.

“Tether,” which Twaddle calls “experimental,” was created with gesso on plywood. The grain of the plywood serves a purpose similar to the smudges in the drawings, creating a second layer of interest beneath the coils of black wire and connecters. With colors ranging from pale beige to medium brown, the pattern suggests ripples on the surface of a lake, waves on a beach and cirrus clouds. Painted on top of the wood-grain is a simple pattern of conjoined wires that appears to be hanging by a thread, a single cable that extends up to and beyond the top of the painting.

“Mirabeau Tile” represents another new direction that resulted from his “desire to see the two-dimensional patterns in relief tiles.” The white textured 19 by 19 inches and 3-3/4 inches deep tiles were cast in hydro-stone and are here hung together in a set of four. Twaddle also used them to cover an entire wall in a recent commission. The symmetrical image depicted in the work on view here is a transformer looped with coils of wire; but when they are used to cover an entire wall, more abstract qualities prevail.

Though limited in the quantity of works, this show unveils intriguing new visual and technical developments. Twaddle accomplishes this while sustaining his basic iconography of the transformer.