Cultural Tensions in the High Desert
Column
by Michael Shaw 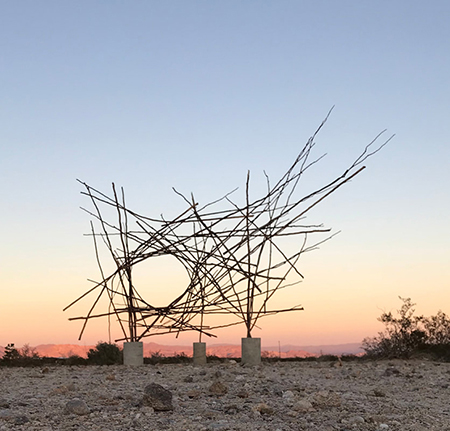 Shortly after the 2020 presidential election was called, I met Joshua Tree-based artist Ben Allanoff at an exhibition here in L.A. (we were both masked). While he was happy to be living and working there — he became a full-time resident in the spring of 2017, after making regular visits for more than 30 years — he was now so concerned about the area’s political divisions that he was speculating that rogue militia types could put up road blockades as a fallout from the resistance to and denial of Biden’s win/Trump’s loss.

There is a substantial contingent of Trump supporters in the High Desert, but the artist/creatives communities are sizable and arguably more visible. It’s as unusual a mix as anywhere in the country. In alluding to our new and most charged ideological signifier, Allanoff told me that “tension over mask wearers and COVID deniers is palpable in any commercial setting,” though he also added that “we are capable of doing business harmoniously anyway.” Still, when I asked him how the last four years of the current Administration has affected the psychological climate of the area, he said that “if it comes down to a civil war, the left will lose because all the auto mechanics, tradesmen, etc., are on the other side. They will have tires, we won't. Game over.” As extreme as that sounds, I don’t begrudge him a certain amount of alarmism. Numerous pundits have alluded to the very real potential for ad-hoc militia to wreak havoc, or at least attempt to, as per the various dog whistles and less subtle calls-to-arms by Orange 45.

Another artist I spoke with, who requested anonymity due to ongoing litigation, has undergone tremendous verbal abuse and harassment by her neighbor, whose property sports ’Don’t Tread on Me’ and Confederate flags. Because the artist I spoke with had hosted artist gatherings, with installation and performance on her property, and she and her partner are a mixed-race couple, the next-door neighbor has stirred up hate in a Facebook group by making up a story about the couple. The neighbor has also cited code violations to the authorities, leading the artist and her partner to spend $30K dismantling the parts of their property they didn’t realize weren’t legal. The harassment has been so bad that they’ve taken to staying elsewhere, returning to their property just once a week to check on things.

In a more public arena, there was the case of the vandalized Black Lives Matter banner (it was spray painted with the word “Hate”). Teddy Quinn, a 22-year resident of Joshua Tree, and co-proprietor of the Beatnik Café, which is part of the Joshua Tree Cultural Preservation Center, adjacent to the banner, said that they cleaned it and it hasn’t been defaced since (the same night, however, Quinn said someone distributed KKK literature to several businesses). Another BLM banner at the other end of town, in Yucca Valley, was destroyed repeatedly, according to Quinn. He helped put up a billboard on the main highway going from 29 Palms into Joshua Tree, featuring the Martin Luther King quote “Hate is too great a burden to bear,” which he said was “too high for the gremlins to reach.”

Quinn noted that there’s definitely a division in the area, which he referred to, despite the art community, as “small town America.” About the influx of artists, he noted that his generation of arrivals, from the late ‘90s, didn’t start it, but it’s grown exponentially over the last 20 years. He  pointed out that, “the same people who are now cleaning the Airbnb’s are having a hard time finding affordable rentals … which drives people further away, people who were born and raised there … it’s something I’m sensitive to.” He added that “everything is turned up several notches with Trump and COVID. If anything, it makes it more important to be a little more aware of what our presence means to other people … to make room for all different voices.”

For most artists, the tension is as much in the atmosphere as the actual. As artist Kelly Witmer wrote me: “it seems like all the artists I know out here are pretty paranoid about COVID, and are avoiding public places where there would be the possibility of clashing with Trump supporters. Or it could be less about being paranoid, and more about being so isolated this year. It’s already a pretty reclusive lifestyle, and I think the pandemic has made many people more agoraphobic.”

Bernard Leibov is the founder and director of BoxoPROJECTS, an artist’s residency in Joshua Tree. “A lot of what’s been going on is more people’s fears than reality,” he told me. “There are distinct ideologies, but no evidence of conflict. A lot of what goes on happens on Facebook.” He says his neighbors, despite their distinctly different political affiliations, all support what he does, even allowing for overflow parking on their properties during the Joshua Treenial, which Leibov hosts on the grounds of his home. “I understand that there are local issues not being addressed that cause people to vote a different way,” he said. “But a lot of the threat is perceived. It could get violent … it’s what some people were expecting, but it didn’t happen.”

Leibov says he works with art as a way of starting a dialogue in the community. When an indigenous artist from British Columbia did a project about the constellations for their residency, Leibov said he received more feedback and discussion than ever before. “Eventually, people get engaged in these subjects,” he said. Many of the projects are now about social awareness, including a choreographer who collaborated with local Latin workers (“24 percent of the local population is Latin,” Leibov said, “and they’re very unseen.”). Meanwhile, he also knows that there’s a history of white poverty in the High Desert. He’s not sure of what that history is, exactly, but it could be a future project: “How do you tackle that as an art subject?”

Sounds like something worth pursuing, potentially bringing members of what could be referred to as ‘the two sides’ together; as a way to pare down some of that divisiveness. But as long as the pandemic reigns, such interactions will be limited to essential trips to the store, and those who do and who don’t wear their masks.