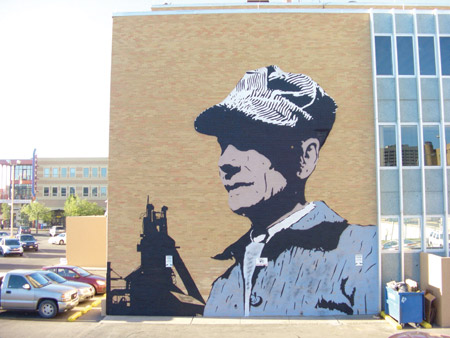 Street artists who paint, paste and sculpt on urban space haven't always received a warm welcome from the fine art world. Reactions to the art form in the past have ranged from a yawn to accusations of vandalism and threats of jail. But as a major project this fall in Albuquerque shows, today street art is increasingly popular with a broad audience, and with the art world too. "STREET ARTS: A Celebration of Hip Hop Culture & Free Expression" was organized by the downtown, nonprofit arts venue 516 ARTS and involved 25 organizations. The project was built around a major two-part exhibition featuring local, national and international graffiti and street artists. It reached deep into the community through related programs including panel discussions, music, dance, theatre, tours, a Hip Hop film festival and a spoken word festival. Suzanne Sbarge, director of 516 ARTS and the "STREET ARTS" project, said its size and impact far surpassed her expectations. "So many people wanted to be involved," she said. "I thought it might be more geared to youth, but there was a shared enthusiasm across the generations that I have never seen to this extent. It reached out farther than the art world normally does. It felt relevant and real."

The combined show was a dazzling look at the history of graffiti and how it created a foundation for street art as a cultural movement. Artists who traveled to Albuquerque developed site-specific projects for the gallery and for city streets. The artists inspired one another and collaborations were born. Murals by Chris Stain of Brooklyn integrated imagery from Chip Thomas, a wheat paste artist and Indian Health Service physician from the Navajo Nation in Arizona, Bojorquez created a monumental mural inside the gallery using text from Hip Hop poet Idris Goodwin's performance piece titled New Mexico Remix. "The artists worked together in a concentrated, heartfelt way," Sbarge said. "They reacted to one another and to each others' imagery and energy. Chaz lived and breathed Idris' text to create something new in the visual realm, with his calligraphic work directly on the gallery wall."

The October 2 opening drew 900 people and remained a draw for individuals and school groups throughout its run ending December 11. Hundreds more took part in "STREET ARTS" through related events, some of which were organized by one of the project's co-sponsors, the ACLU of New Mexico, with the goal of educating young people about their civil liberties. The spoken word festival, called "SHOUT-OUT: A Festival of Rhythm & Rhyme," featured poets, musicians and rappers from near and far, including Amiri Baraka, Cecil Taylor, Dafnis Prieto and the Proverb Trio, Amalia Ortiz, Kevin Coval and local beatboxer Saywut?! performing with members of New Mexico Symphony Orchestra. Goodwin, the festival's co-curator with Sbarge and Tom Guralnick of Albuquerque's Outpost Performance Space, said, "We wanted to blend music, poetry and visuals to present a balanced spectrum of America. You could feel the palpable electricity in it. People were touched and moved in all the right ways."

Other events included a gallery talk with famed critic Dave Hickey, who moved to Albuquerque from Las Vegas in mid-2010 with his wife, art historian and curator Libby Lumpkin; performances with the dance troupe Molodi; and international threads such as a talk on Brazilian graffiti and performances by poet Jonathan Khumbulani Nkala from Zimbabwe. New York documentarian and artist Henry Chalfant called the "STREET ARTS" project refreshing. "I was completely surprised and pleased to see some really nice local talent, street artists like Jaque Fragua and Chip Thomas," he said. "I really enjoyed the downtown murals. It's what graffiti started out to be, representing people who didn't otherwise have a means of expression."

Freedom of expression was a theme throughout the project. Discussions centered on such questions as "Who is art for?" and "Who gets to be part of the art world?" and explored the boundaries and relationship between the street and the gallery. Community members engaged in a larger dialog with artists, curators, scholars, lawyers, anthropologists and public planners. "The creative process can take you to many places, like Albuquerque, New Mexico," said Bojorquez, who not only created artwork, but lectured and taught local youth during his Albuquerque residency. "The power of one mural can manifest itself to tie the collaboration and participation of many creative people into an event that celebrates the best in all of us."

West Coast art lovers hungry to continue this debate, and to experience more street art, need not wait long; this past fall, Jeffrey Deitch, the new director of the Museum of Contemporary Art (MOCA) in Los Angeles, announced his plans for a major exhibition of graffiti and street art in 2011, to be called "Art in the Streets."