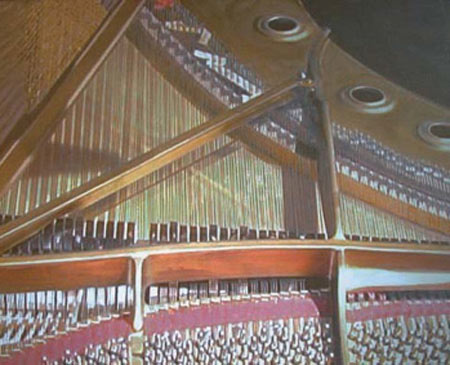 This mini-retrospective of 26 pieces by revered Bay Area conceptual artist Paul Kos — a founding member of the Bay Area conceptual art movement – compresses his contributions into a nice mix of media, from sculpture to video, drawing to painting. The feel is consistent: simple, calm but having impact, whether that be to inspire insight or imagination.

We enter the show to four works from 1969 that give instructions on projects to be done in nature. Three of these document the melting and leftover traces of red bricks and are to take place in Utah’s Salt Flats; and the other involves the melting of a block of ice (one can’t help but think of Francis Alÿs here, albeit his melting-ice work came some fourteen years later). An immediate connection can be drawn to earthworks artist Robert Smithson, who was a contemporary of Kos’s, in the imaginative and subtle ways Kos conceived of interacting with the outdoors (this in addition to the artists’ shared interest in the saltier areas of Utah). These works touch on a theme found throughout the exhibition as well as throughout Kos’s career: the exploration of temporary states of matter and its residue, as well as the interaction of the natural world with the artist and the man.

The 1987 piece “Equilibrium,” in which two tied-together chopsticks that have a feather on one end and piece of coal on the other are balanced on a fine point, and the larger 2007 sculpture “Coal/Canary (Weight of a Song),” which features two large pieces of coal on a wheeled cart, are other good examples of Kos’ examination of the man/nature connection, as well as workers and working. Additionally, this pairing (the two works are placed side by side) is one of two that show works made years apart that address the same idea; it proves to be an elegant way of demonstrating how Kos returns to past subject matter.

This show also features five floor-to-ceiling vertical pieces from the 1978 series “Up, Down, Strange and Change,” which are rubbings done on Kos’s studio walls. These works touch on another of the artist’s primary interests: process. It’s an interest shared by fellow Bay Area conceptualist Tom Marioni, and best reflected in a work such as “Circle Drawing.”

The exhibition establishes a meaningful historical perspective on ideas we’ve now long since become familiar with – we are viewing the roots of Bay Area conceptual practice. In addition, it illuminates ways in which those ideas are being brought to the present. This show lays the groundwork for museum scale exhibitions to come.