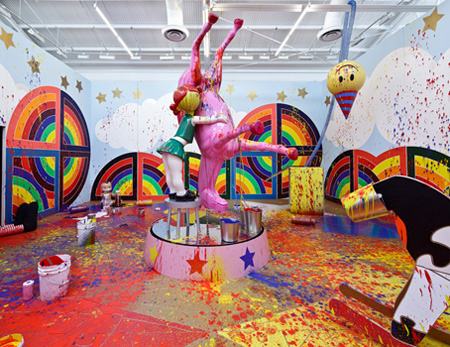 Richard Jackson has been working in L.A. all this time, but his last solo show here was in 1990, and much of his local visibility came even earlier than that. In recent years he’s built up a revered reputation showing in New York and Europe, so his return here should bring with it great critical interest, and deservedly so. “The Little Girl’s Room” brings a level of irreverence that Jackson has been building upon for decades. The centerpiece is an interior room of the gallery, the walls created from canvases filled with children’s room clouds and brightly-colored shapes borrowed directly from Frank Stella’s “Protractor” series. On a mirrored stage at the room’s center stands a stylized, larger-than-human scaled girl hugging an upside down pink unicorn, but that’s just the setup. As the climax to the work’s installation, paint tubes coming out of the unicorn’s genitals bear the evidence of having been sprayed throughout the room, with generous spatters across the walls, the floor, the girl and the unicorn itself. Other characters, including an over-sized clown in a closet, also bear witness.

This mixture of sexual referents with childhood clichés is a territory well-worn by Jackson’s local peer, Paul McCarthy, and indeed McCarthy may very well have prepared most of us for these kinds of pseudo-grotesque performance relics. One of the other two pieces in the show, outside “The Little Girl’s Room” is “Upside Down Girl with Unicorn Head,” a painted fiberglass work in which the unicorn’s horn is, in this case mounted into the genitals of the spread-legged girl. Here the McCarthy presence is even more prominent. One has to wonder, meanwhile, if this newest work could be seen differently in the context of Jackson’s full career arc, under-the-radar as it has been locally.