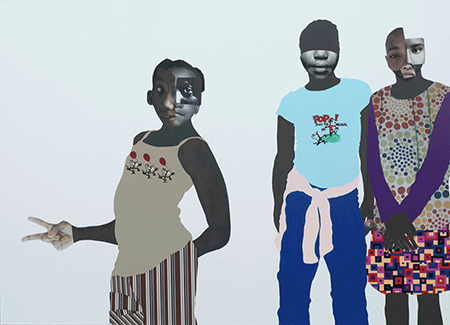 The art world season has for many years really been divided in two distinct halves, the first launching after Labor Day, the second after New Year’s. Covid has not changed that, but unlike the decisive shutdown that occurred in March, 2020, we are currently in a season of confusion. Some spaces have chosen to close to public traffic; others offer limited public hours, carefully regulate the number of visitors, and enforce mask wearing; others still maintain regular hours with little or no regulation. That staple of art world social life and commerce, the opening reception, after making something of a comeback last fall, is back on shaky ground, as least for the next month or two.

The creative binary that runs parallel to this pairing of hunger for direct experience versus cautionary distancing can be seen reflected in many gallery and museum offerings. Are artists aggressively addressing public issues, or are they withdrawing to the interior space of art for art’s sake? It seems to me that nothing could be more natural than that we get both. Considering some of the new January exhibitions may reveal clues as to how this advance and retreat mechanism, like the biology of breathing, is currently reshaping the art world and much beyond. The metaphorical question is whether we are heading towards a period of balanced choices, or hyperventilating. The consequences of this, however, will be all too real.

Race is and will be at the center of all of this. The cultural and political strides painstakingly make in recent decades are given voice by Deborah Roberts, who has been collaging figures for many years, particularly of Black children, that simultaneously distort and reveal. In her current show at MCA Denver, the world of post-Black Lives Matter feelings of vulnerability is given expression by the disjunctive contrast between the figures’ warm and playful postures and the multiple features of the faces. Their humanizing effect now outweighs the troubling allusion to stereotype and scarification that registered more powerfully in years past. These are images of reconciliation that hint at confrontation before turning away from it.

In the last two years there has been a proliferation of positive Black images in advertising and a growth in the variety of roles Black performers are given in film and TV. It can be difficult to separate whether this has objectively influenced what Roberts produces in the studio, or is more a product of that changing media environment. But the pleasures of her fluid compositions and intuitive feel for pattern make her intensions clear enough. Distortion serves here to humanize, to foster a warmth of connection between viewer and image that still gives us plenty to contemplate. If Roberts the artist came of age under the mesmerizing influence of Romare Bearden, she has proven to be a suitable heir.

Of course there are plenty of artists whose critiques of where we come from or where we seem to be headed convey a very different tone. We’ve never lacked for the sharp feelings conveyed by visual satirists such as Sue Coe, Ralph Steadman or, in earlier times, Honoré Daumier. Andres Serrano, best remembered for the “Piss Christ” photograph that aroused public controversy back in the 1980s, puts the stamp of our time on this tradition. Newly released, his first film, titled “Insurrection” is carefully timed to the first anniversary of the January 6th insurrection and the 107th anniversary of D.W. Griffith’s glorification of the Ku Klux Klan, “Birth of a Nation.” The sheer variety of points of view and dizzying camera angle cuts reflect the dozens of cameras Serrano was able to muster from clips taken by the insurrectionists themselves. If you have tried to imagine how exhausted the Capitol Police were after hours of pitched battle, this may be the closest facsimile we are likely to experience. Given Serrano’s 2019 compilation of Trump paraphernalia, “The Game: All Things Trump,” the artist demurely stands to one side as we feel our own emotions well up in response. We learn more about ourselves than the ostensible subject or producer, just as Serrano has intended.

The type of art that eschews such pointed observation and response to what we all can see in the news, by contrast finds its way to a high degree of both immersion and refinement. When you see it you know it by how it makes you relax, settle in for a while to let the work carry you away. This is a post-Kusama aesthetic that rejects the kitschy entertainment value of too much of the immersive installation projects of the last several years. The very definition of this achievement is present in Hiroshi Senju’s “Waterfalls,” currently featured in a site-specific installation at the Art Institute of Chicago. He honors the act of painting both from a highly spontaneous and deliberately controlled process. At one point paint is poured with a minimum of manipulation, a direct quote of mid-century color field bucket-to-canvas experimentation. But then the artist starts adding and carving away with an airbrush that lends just enough specificity to his white-on-blue abstractions to register as the waterfalls of the title, while at the same time functioning as an abstraction of exceptional presence.

It is the calm presence of these images on which you focus your attention. The reference point of the waterfall provides a resting place, but the variances in paint application and the vertical pours keep the eye active. If they were deliberately contemplative Senju would minimize the drama of his compositions in favor of holding the eye in one place. But that is not what he does. Instead, he allows us to walk through both paint and nature. Matisse would be pleased to sit in that chair. This is how we transition from the high intensity of engaging the dangers of authoritarianism, climate change, racial disparity and growing political violence, to the pure pleasures of seeing. On one level we are driven to seek relief. One another we must remind ourselves of just what we are fighting for (as fight we must): peace and tranquility.