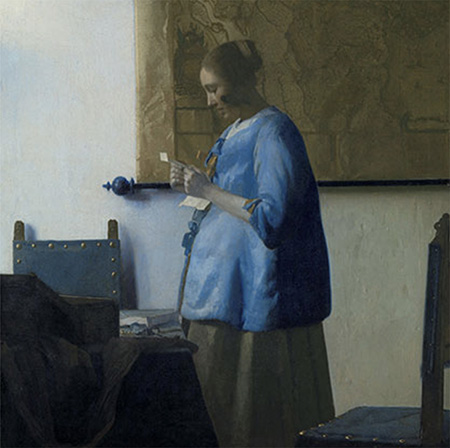 The latest featured work of the Meadows Museum’s Masterpiece in Residence loan program, coming from the Frick Collection in New York, is Diego Velázquez’ masterpiece “King Philip IV of Spain” (1644). Also known as the “Fraga Philip,” this is the first time it has left its home in a century.

A favorite of the collection’s founder Henry Clay Frick, the painting is a prime example of Spanish court portraiture, executed by Velazquez at the height of his powers.  Here it joins three other masterpieces by the artist held by the Meadows collection, “Portrait of Philip IV” (1624), the elegant and secular “Sibyl with Tabula Rasa” (1648), and the “Portrait of Queen Mariana,” the late work among the group, from 1656.

In the second exhibition a dialogue is put in play between Dutch master, and Velazquez contemporary, Johannes Vermeer’s “Woman in Blue Reading a Letter” (1663, on loan from the Rijksmuseum in Amsterdam), and “The image Disappears” (1938, on loan from the Fundacio Gala-Salvador Dali in Figueres, Spain) by 20th century Surrealist Salvador Dali, a work directly inspired by Vermeer’s painting.

Where Velázquez painted countless images of aristocratic subjects as representations of the might of the realm, a 17th century projection of authority, Vermeer painted far fewer works, and significantly, the “Woman in Blue” is typical of his genre paintings of common people. Unlike Velazquez’ royal portraits, Vermeer’s are done on a small scale, in quiet interior spaces, indeed in the same room, regarded by many experts as Vermeer’s home.

Evident in Velázquez’ and Vermeer’s paintings is the care each artist took to achieve naturalism in texture and tone. Velázquez’ portrait of King Philip displays a loose and vibrant handling of paint, absent from the earlier portrait. The contrast suggests changes to his style developed after a trip to Venice. Likewise, a careful review of Vermeer’s early work reveals the maturation evident in “Woman in Blue,” executed during his middle period.

Both artists are interested in light and shadow, this being the Baroque period, but the similarity ends there. With Vermeer the cascade of light in his painting is part of the subject matter, a metaphor that stands in for the passage of time and a reflection on spirituality. For Velazquez it is secondary to the might of the King, who stares out at us, immaculate in his military attire with baton, sword, and red plumed hat, all symbols of power.

Surrealism comes into play here due to Dali’s obsession with Vermeer’s painting. He actually painted “The Image Disappears” as an homage to both Vermeer and Velázquez; and keep in mind he only knew the original from black and white copies. Dali’s version stays within a monochromatic range, adding a curtain to the left. He also accentuates the sinuous curves of the woman’s figure, and changes Vermeer’s map of the Netherlands to a map of Spain. The Netherlands was liberated from Spanish rule under 1648’s Peace of Westphalia, during the lifetime of both earlier artists.

While acknowledging Vermeer as a master, Dali also foregrounds Velázquez’ influence with a surrealist twist. From the title, the idea that the “image disappears” is just that; if you look correctly, stand back perhaps, you see the figure change into a profile view of the face of Velázquez.  A bent arm becomes part of a nose and mustache, the curtain his hair, and her head his eye — a perfect paranoiac-critical distortion.

This is the first time the two paintings have been exhibited together. Dali remains unmistakably himself with a signature piece, while at the same time achieving what would have been unthinkable during the lifetime of the two artists he venerates.  Of course, his famous self-promotion and lack of modesty also come through because, beyond praising his artistic forebears, he trumpets his place as an heir to their mastery.

Artistic intentions aside, these masterpieces clearly represent the best of what each artist has become known for. Dali’s painting provides a link, or face off, that sets up the visual conversation between Vermeer and Velazquez. There’s a tension at play between the dual images that reveals what French aesthetician Jacques Ranciere calls Aisthesis, or the “realm of the sensible.” That realm, as we see here, provides for the true power of art.