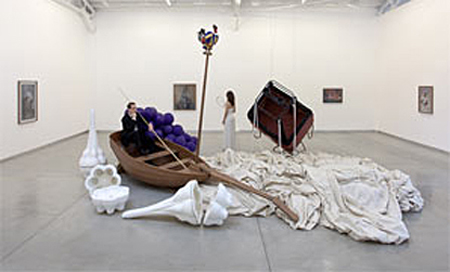 Pietro Roccasalva's U.S. solo debut, "The Strange Young Neighbors," has as its centerpiece an installation dubbed "Untitled (Just Married Machine #1)." The work features a grounded hot air balloon topped by a wooden rowboat, along with neighboring porcelain-like crowns that also resemble toilets. For the day of the opening, an allegedly "actual married couple" also graced the Machine- he in a tux, sitting sternly in the boat, she in white gown, facing the other direction and standing with an oddly strung tennis racquet, each remaining as motionless as possible in true Abramovic-esque commitment.

Beyond the opening day and night charge of this tableau vivant – which is also depicted, more anthropomorphically and sans the couple in an oil painting of a goblet and bread loaf still life also included in the show – are traditional yet oddly menacing portraits. "Il Traviatore", a recurring waiter character of Roccasalva's, is always armed with a traditional silver serving tray (and its accompanying dome), topped by a lemon juicer. In the various incarnations of this character, Roccasalva combines Francis Bacon-like faces with a style of Italian draftsmanship highly reminiscent of religious altar iconography, and the higher the Bacon quotient, the more menacing the character becomes. The inclusion of several charcoal studies of "Il Traviatore," beautiful in their classicism yet rather soft in the context of the overall oeuvre, compromise the eccentric intensity of the main servings, and yet the level of ambition in Roccasalva's larger gesture – whether you're able to draw a link between "Il Traviatore" and the "Just Married Machine" or not - remains formidable.