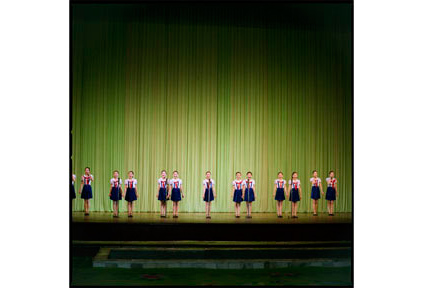 Hiroshi Watanabe was born in Japan, trained in photography, came to tinseltown to make TV commercials and apparently realized that art still called him. This suite of color photos titled “Ideology in Paradise” (a good little oxymoron) is a collection that includes shots of nicely obedient Asian children in indigenous and official school uniforms standing ever so neatly, and creating these human grids of colorful disciplined bodies. On the one hand the images encapsulate all our clichés of the “controlled” Asian. What is interesting though is that as we engage a much more nuanced global environment where Chinese capitalists roil in excess and North Korea looks quite rabid, these images percolate with a kind of irony rather than coming through as a record of the West’s vision of the Confucian East