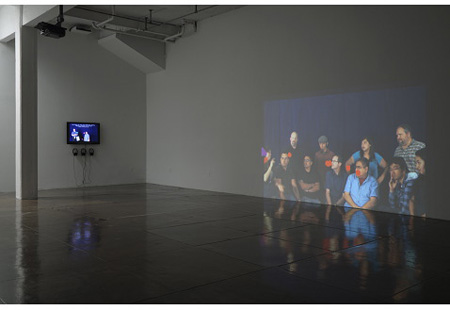 With "Who’s on First" Bud Abbott and Lou Costello wielded hilarious verbal mayhem in their classic baseball comedy routine. Add another level of complexity with two deaf actors using American Sign Language and you have one of Houston artist James Sham’s funny, insightful, captioned videos in his “Untitled” exhibit. In another video, a sign interpreter follows a military eye-tracking device to read the movements of a deaf actor signing an art critic’s thoughts on modern art, resulting in disastrous though not deliberate misunderstandings.

Put your ear up to bottles sticking out from the gallery wall and you can hear Texas civic leaders murmuring incoherently about their lives. In the courtyard, Sham has created a giant, inflatable model of a drone that hovers in the treetops, a reminder of the government’s increasing use of robotic surveillance devices to listen and peer into our lives to detect, rightly or wrongly, what we’re doing.