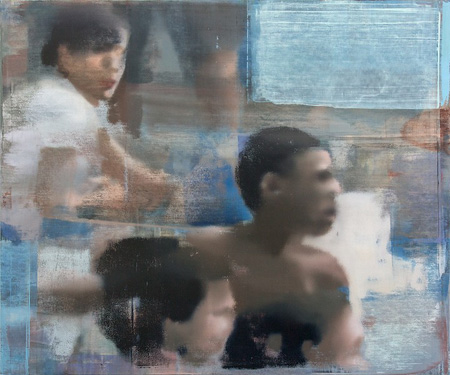 The received wisdom explaining the advent of modernist painting is that the advent of photography forced painters, their traditional role as visual recorders now usurped, to focus on qualities inherent in the medium. Hence, modernist subjectivity, flatness and abstraction. That formalist argument ignores the uses that painters have made of photography’s expansion of the aesthetic horizon, from Impressionism on (and couldn’t Impressionism be considered a precursor to the snapshot esthetic?), including everything from Kodachrome photorealism to abstract illusionism’s faux painterliness: coolly rendered drips and blobs.

The paintings comprising Philip Buller’s current show, “Everyone,” derive from a color photograph of a crowded beach scene (evidently taken from a height) that the artist found and decided to explore. Buller: “All these little shapes, these tiny figures, each one full of secrets. I have a sense that just beyond my comprehension, but perhaps within reach of my unconscious, is a deep truth concerning the relationship between the one and the many.”

The nine oils on linen zoom in on different parts of the photo. The different groups of bathers provide frameworks for Buller’s virtuoso paint-handling, combining abstraction and illusionism, with hard-edged flat patches set against dry-brushed halftones. Our perceptions form and dissolve as our gaze wanders across, into and out of the painted surfaces. The pictorial ambiguity serves as a metaphor for the mystery of time. If the stately, composed figures recall Seurat and Piero della Francesca, the loose paint handling owes something to Bay Area Figuration (and there’s a resemblance to the figure paintings of former studio mate Christopher Brown, that cannot be overlooked). Buller has produced lyrical paintings — "Beach Crowd," "Small Group," "Foam," "Yellow Umbrella," "Every One" — that make the human spectacle both engaging and immediate, and remake the case for painting. Despite whatever else happens in art as technology marches on, these images are timely and timeless.