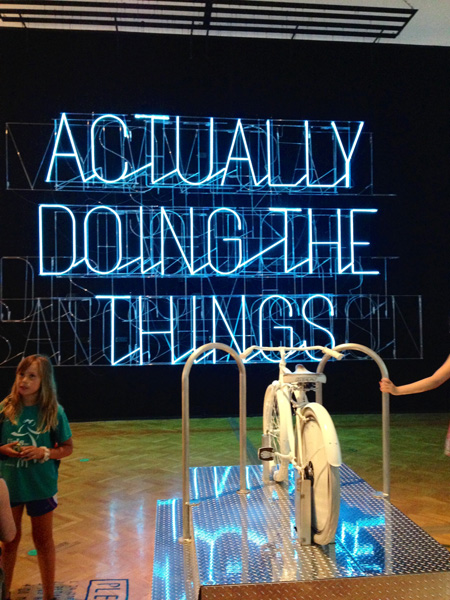 “This exhibition will not make you happier,” prompts the signage of award-winning graphic designer Stefan Sagmeister’s “The Happy Show.” Despite this warning, the exhibition contains plenty of cheerful, interactive media: a bicycle-powered, neon light installation, several stations at which to create your own doodles, and two displays that literally dispense candy. However, intermingled amongst these delights are the artist’s more complex analyses on the subject of “happiness.”

The bright yellow walls of the immersive exhibition are covered with videos, charts, illustrations and Sagmeister’s handwritten notations stemming from his personal investigation into the “hows” and “whys” of human happiness. These reflections are simultaneously documented in a segment of an in-progress feature film also on display. Three enormous, inflatable monkeys dominate a vast hall of the Cultural Center, each bearing a sign that together read: “EVERYBODY / THINKS / THEY ARE RIGHT.” This embodies the futility of defining a notion that is as universal in its understanding as it is subjective.