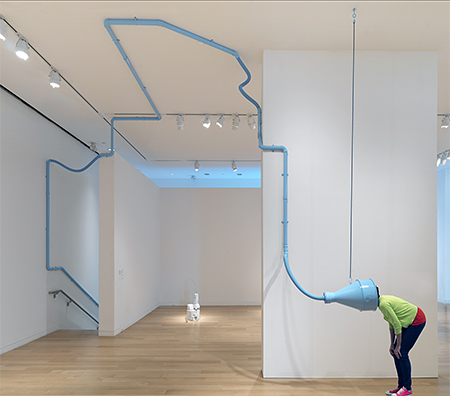 Inclusion in the 2004 Whitney Biennial and other major venues in the last decade have earned Conceptual artist Julianne Swartz her first major museum survey. Traveling from the deCordova Sculpture Park and Museum outside of Boston, the exhibition is best enjoyed with full visual and auditory engagement, allowing for various emotional connections along the way. The viewer needs to lean in to the works, listen closely, watch shadows, peer through holes in the wall and through periscope-like pieces and, finally, be open to surprises.

With the site-specific piece “How Deep is Your” (2012) the idea is to follow a bright blue pipe as it winds its way through the museum; we are invited to listen for “soundleaks,” then stick our heads into the terminating funnel to hear the interlacing of old Bee Gees and John Lennon songs. “Loop” (2010) is a tangle of colored wires and button-size speakers in a soundproof room, softly projecting a babel of voices, chimes and chirps.

Included in the survey are several of Swartz’s more minimalist pieces using cement blocks, magnets, feathers, paper and bent wire. Listen and you will sometimes perceive the sound of clock movements.