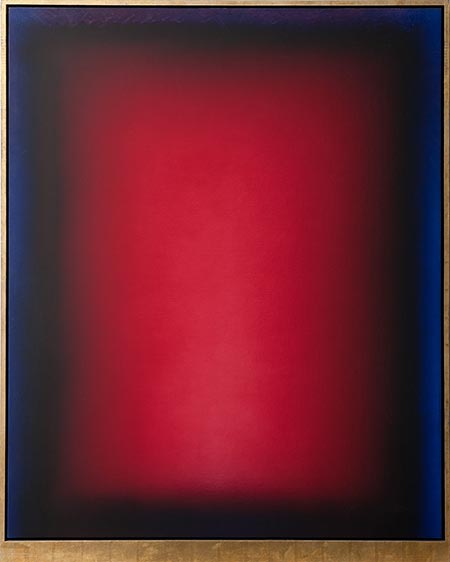 The themed, 15-artist show "Gold Rush" is an object lesson in alchemy. It turns out that the precious metal is not just about glimmer and glitz, but about the potential to combine it with more commonplace materials that can conjure up multifaceted artworks.

Making a rare gallery appearance, for instance, is the first “Montana” tapestry by Olga de Amaral of Colombia, whose intricate process of weaving brings together linen, gesso, paint, thread, parchment and gold leaf, all in the minutest of hand-sewn applications. Sought-after artist Nancy Lorenz is represented by "Moongold Wave," in which she has scored a gold-leaf-covered board to prepare it for undulating inlays of mother-of-pearl. In “Holy Vessel,” Andrew Schoultz tackles the political implications of gold by dripping it onto a stretched U.S. flag bearing the image of a slave ship. Japanese-American artist Makoto Fujimura is represented by the 11-foot-wide “Charis,” composed entirely of gold leaf and crushed precious minerals, in the Nihonga style.

One of the most involving works is by the late Eric Orr, a key figure in the Light and Space movement. In “Red Time Window,” dark oils are washed over a canvas until the viewer is left with a mesmerizing void in the center. Orr gives it a gold leaf and lead frame and leaves traces of his own blood along the top edge, in the ultimate statement on mixing elements.