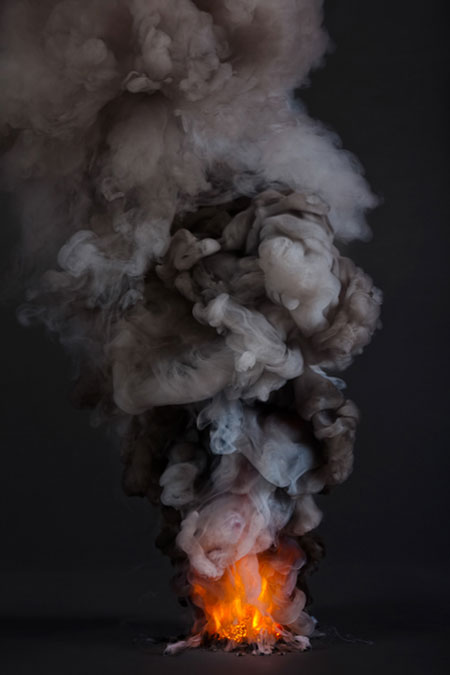 In a collaboration between Kevin Cooley & Phillip Andrew that is dominantly credited to Cooley, "Unexplored Territory" makes various allusions to space and the solar system. Yet its most memorable offerings are thoroughly earthbound. Cooley's "Controlled Burn" series is the most memorable: photos of studio-lit fires are captured very close to the ground, all but completely consumed by their own fumes. The wafts of smoke bloom into a velvety loveliness, and in one photo in particular, the black smoke is so visceral and transformed that it's as if it was concocted out of cotton. Cooley and Lewis teamed up for the likely-to-be crowd-pleasing HD video, "We Can Break Through," which features a pair of box fans tethered to an unplugged power strip, yet convincingly suspended and hovering aloft from, presumably, their own amped up RPMs (and some very facile CGI).  It's a nice trick, but the more 'real' illusions in print carry a far more satisfying punch.