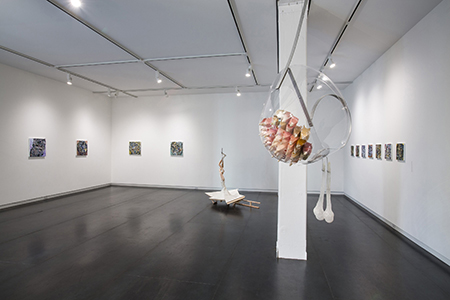 The idea of religious fanaticism is central to the two-person show, “Fanatic," mounted by Jenene Nagy and Josh Smith’s traveling curatorial program, Tilt Export. Tim Flowers’ oil paintings interpret ritualistic vestments via tin-foil face masks, the interiors of which he has painted, paying special attention to their crinkled, topographical surfaces. Rebecca Ripple’s religious critique is more direct, drawing upon her Catholic-school upbringing and the complexes it gave her about her body. The most harrowing of her sculptural installations is called "Jesus is a Blackhead" and is based on her memory of a nun telling her, “Jesus is everywhere, even in your pores.”

As an adolescent painfully conscious of her skin, Ripple recalls her revulsion at imagining the Son of God residing within the blackheads on her nose. The Plexiglas sculpture, mounted on a metal armature crowned with a crucifix, is in the shape of a nose, as viewed from the side. But straight-on, it looks like an amalgamation of a breast and a scrotum. The breast-shaped hemisphere is dotted with holes, inside of which are myriad tubes, each tipped with a miniature picture of Christ. Beneath the Plexi a cast-resin appendage dangles crudely. The senses of exposure and vulnerability evoked by the work verge on the body-horror genre of literature and film. It is a piece that, once seen, is difficult to forget.